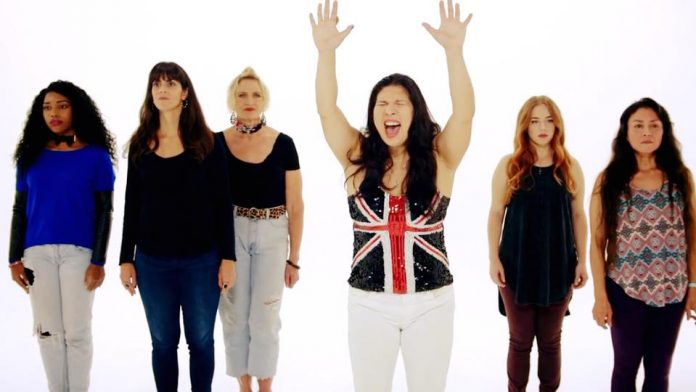 Emiko powerful video for us all Emiko – I BELIEVE YOU:  I can’t tell you how pleased I am to have gotten a preview of internationally-acclaimed award winning songwriter Emiko’s most powerful video to date…

…after the flurry of the last few weeks, with the “Me Too” posts going viral, this song is absolutely on-target, and Emiko is a perfect spokesperson for the issue, since she was a survivor of sexual assault, and in fact she wrote the song with that in mind.

As I watched this video, I was reminded of ones that call for unity and the bonding of folks ’round the world to “come together”… most notably, Stevie Wonder’s “We Are The World” possessed the same kind of unparalleled power and vision that Emiko has created with “I Believe You”; it’s also important to note that her producer for this video is Tommy Faragher, who she’s worked with on several other projects as well.

My own travels around the globe (I served with the military for over 40 years) made me witness to domestic violence and assault in many of it’s forms, and I know that it’s a very real thing that can only be quashed by powerful statements like Emiko and her volunteers make through this music… of course, the more important thing is for ALL of us (men, women, children) to STAND UP and say “we won’t tolerate this animal behavior any longer”… the kind of “blind-eye” policy Emiko wove right into the song is exactly what’s at issue here… it MUST STOP NOW!

There’s no doubt that Emiko’s superb skill on the Hammond, as well as the solid lyrics, make this a dynamo effort… but, it’s really the idea that lots (& LOTS) of people responded to the call to put the video together in a very short period of time that makes it so amazing… not only that, but you will realize (immediately) that the real power is in bringing the “collective voice” to the forefront – and, ensuring that the perpetrators know that their number is up… that others DO BELIEVE that it’s wrong to sweep assault (in all it’s treacherous forms) under the carpet.

For ALL the folks who joined Emiko, and for all who will be watching this excellent message of hope and unity – congratulations for your courage, your talent and creativity! The I Believe You Project launches with the release of the official music video, but will have other videos, including a documentary, interviews, and more included as part of the introductory resources that will be posted to her I Believe You website