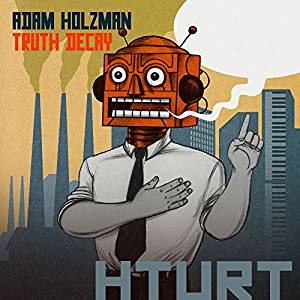 Adam Holzman masterful keyboard artistry Adam Holzman – TRUTH DECAY:  Adam’s keyboard mastery is always a welcome addition here, and on his new release he’s outdone himself… he’s joined by Nick Beggs, Craig Blundell, Abe Fogle, Theo Travis, Mark Egan, Laurence Cottle, Steven Wilson, Fred Cash, Jane Getter, Ofer Assaf, Frank Hackl, Randy McStine, Davide Ragazzoni, and Stefano Olivato… it’s actually his first full album since he joined Steven Wilson’s band, and is absolutely killer prog/jazz/rock… since it’s still in pre-order phase, the samples aren’t available, but I was mighty pleased to listen to the high-energy “Are You High?”… the tune starts right off at full-tilt boogie & continues to roll you on into the stratosphere with lots (& LOTS) of great keyboard changes.  Though I couldn’t spot any videos of him from this album, I’d advise you to watch his Moog solo performance with the Steven Wilson band, who he’s been playing with for six years (he’s also a veteran of tons of other diverse groups… Miles Davis, Grover Washington, Wayne Shorter and the Jane Getter band just to name a few)…

…all I could do after watching & listening to that solo is – REPLAY!

The title track on his new release, “Truth Decay”, features vocals… a departure from the norm for Adam, but the lyrics are superb, and his keyboards are magnificent… I can (easily) see this one rising right to the top of the charts, especially in light of our current problems with the evaporation of “real” in the political arena!

If you’re a dedicated follower of prog/rock/jazz, you won’t be able to do without this album in your collection, & that’s especially true of tunes like my personal favorite, “Ectoplasm”; it’s the opening track, and aurally shows Adam’s keyboard wizardry in all the best lights… punchy & full of life!

Adam’s superb release gets a MOST HIGHLY RECOMMENDED from these ancient ears, as well as a (perfect) “EQ” (energy quotient) rating of 5.00… meaning it also gets a “PICK” for “best keyboard-led release in 2018”!  Get more information about this fascinating and talented player at Adam’s Facebook page.       Rotcod Zzaj