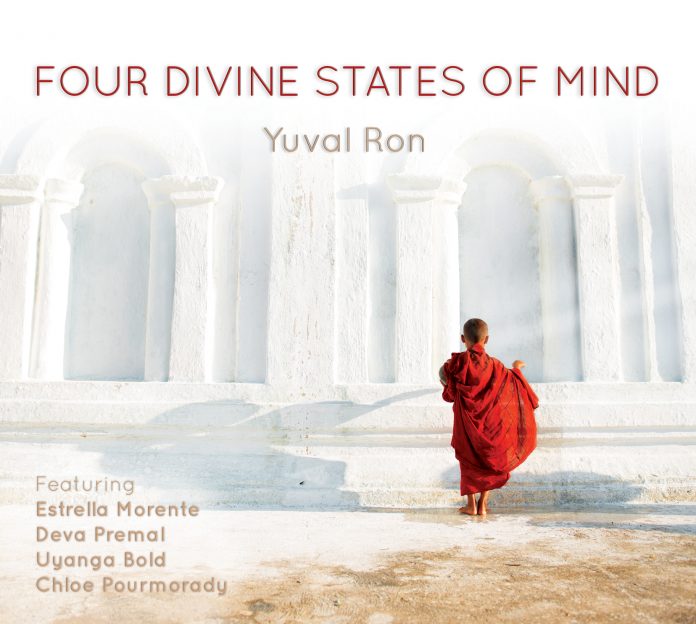 Ultimately inspiring world music Yuval Ron/Metta Mindfulness Music – FOUR DIVINE STATES OF MIND:  When I first began playing this ultimately inspiring world music release, I was immediately reminded of the Love, Devotion, Surrender album by Carlos Santana and John McGlaughlin… the difference (for me, at least) is that Yuval’s astounding music, performed by Estrella Morente, Deva Premal, Uyanga Bold, and Chloe Pourmorady is right “on time” for the disturbing times we are living through in 2020… you should watch and enjoy the well-crafted launch video first…

…many more enchanting and tasteful videos are available when you SUBSCRIBE to the Metta Mindfulness Music channel… I’ve been there for a long time now; you’ll find live performances, albums and interviews that are very enjoyable.

Spanish flamenco singer Estrella Morente’s vocal work on the scintillating 11:47 “Compassion” speaks musically of the beauty of the purity available through the Jewel of the Lotus, and will transport you to true enlightenment and wisdom… there’s (absolutely) no question that this performance will be in line for an award… it simply SOARS!

I first reviewed Yuval’s work on an album called “Voyage Through the Chakras“, where he got very high marks from me… you’ll hear why when you listen to the deeply moving chime/bell intro to the almost “otherworldly” closer, “Equanimity“, featuring Uyanga Bold… this performance brings back visions of my own journeys to temples up and down the Korean peninsula, where the powers of the universe were vibrantly accessible.

The song that I chose as my personal favorite of the four (long) aural adventures is (without question) the 14:34 “Vicarious Joy“… singer Deva Premal brings to LIFE the mantra which in part says “May all beings everywhere be happy and free“… in addition to Deva’s vocal, the album also features performances by musicians like Pandit Nayan Ghosh, Alam Khan, Adam Del Monte, Somnath Roy, Dennis Karmazyn, Jamie Papish, Elinor Sitrish and Yuval Ron (you can view the complete list on the CREDITS section for the album) this song was an “instant pick” for my iPhone player, where it will stay – for the duration!