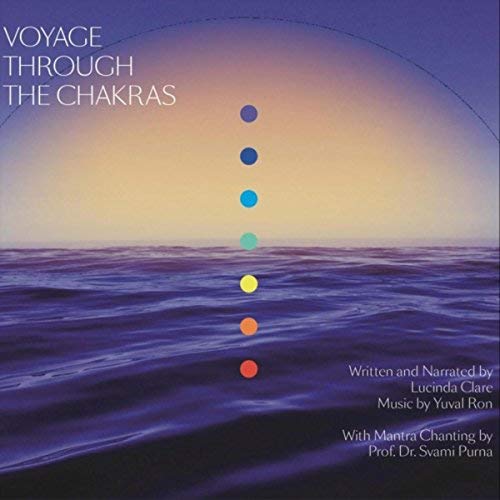 Sublime aural healing voyage Lucinda Clare & Yuval Ron – VOYAGE THROUGH THE CHAKRAS:  For a great little teaser of this fantastic healing voyage, please check out the players on YouTube first…

…there was a time (many years ago) when I was introduced to the power that music can exert on a broken soul, as a part of my therapy… I’ve listened to many such albums since that time, and can honestly say that this album transcends nearly all of them, melding Lucinda’s spoken art with the beautiful music of many other players she brought along with her on this journey.  Be sure you SUBSCRIBE to the “Metta Mindfulness Music” channel, too.

This is also a double album, so you get (well) over two hours of wonderment… one of my personal favorites is the instrumental version of “Root Chakra“, featuring Kenneth Goff… you can hear universes moving on this splendid 10:14 excursion.

Lucinda’s serene performance on “Third Eye Chakra Guided Meditation” literally had chills running up and down my spine… an exquisite marraige of the spoken word with music that speaks with the full power of our being… simple, but magically beautiful!

I have no doubt that my therapist (of forty years ago) would embrace this album for the healing power it projects, and that’s especially true on pieces like my personal favorite of the fourteen offered up, “Crown Chakra Featuring Brien Engle“, which closes out the second CD… it brings to mind celestial choirs of angels, and is full of musical power.

I give Lucinda, Yuval and all the players a MOST HIGHLY RECOMMENDED, with an “EQ” (energy quotient) rating of 4.99 for this wonderful aural journey.  Get more information at the Metta Mindfulness Music website.          Rotcod Zzaj