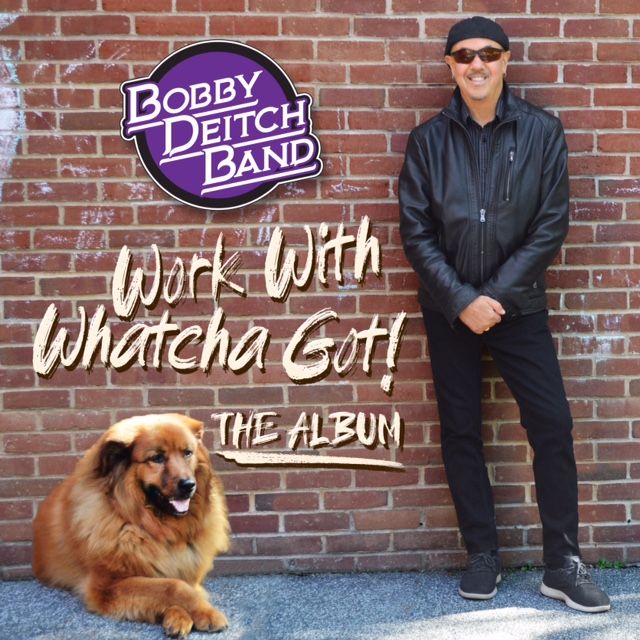 Timely powerful uplifting soul Bobby Deitch Band – WORK WITH WHATCHA GOT:  Believe it or not, there was a time when I was “on the street” every night, bumpin’ hips with th’ best of ’em, and Bobby’s timely, powerful and uplifting soul music takes me right (right ON) back to those nights in a big way… before I move on, check out the promo trailer…

…if you watched that, you’re prolly rollin’ ’round your studio (or your music room, living room, whatevah’)… to watch & hear a whole lot more, be sure to SUBSCRIBE to the Bobby Deitch Band YouTube channel… it’s a winner.

The lineup is spectacular… Bobby is the songwriter and does vocals, drums, keyboards, guitar and percussion; Denise Deitch does vocals & percussion; Matt Wayne plays alto, tenor and baritone saxophones, flute, vocals, keyboards, horn arrangements as well as recording/mixing engineer and producer; Natasha DiMarco kicks it out on vocals; Dave Reiss plays bass guitar, guitar and is assistant engineer, with Scott Reeves on stellar guitar; Joel Newton’s grand guitar licks, Joe “Mamma” Carpentieri doing drums and Eddy Bishai compin’ furiously on keyboards, as well as  keyboardist/vocalist Nigel Hall on many of the songs… you’ll hear their total talent for soulful music as you scope out the down & fon-kee “If Looks Could Kill“… I almost hear shades of old Isley Brothers albums on this tune, and DJ’s ’round the globe will be spinnin’ this CONSTANTLY!

Every clique has one, & you’ll recognize the one in yours as soon as you catch the first couple bars of “Constant Complainer“… throaty vocals and tight lyrics make this a tune you’ll be struttin’ to often… it’s actually a duet with Grammy® Lifetime Achievement Award recipient George Porter jr., bassist from the Meters.

You want old-fashioned hip-shakin’ movement?  You’re gonna’ agree with me right away… the closer, “It’s You“, will have you the shimmy, the shake & ALL those moves; Bobby’s son, Adam Deitch (Average White Band, John Scofield, Wyclef Jean) performs drums on this tune, too… it’s my choice for personal favorite of the nine offered up on the album!