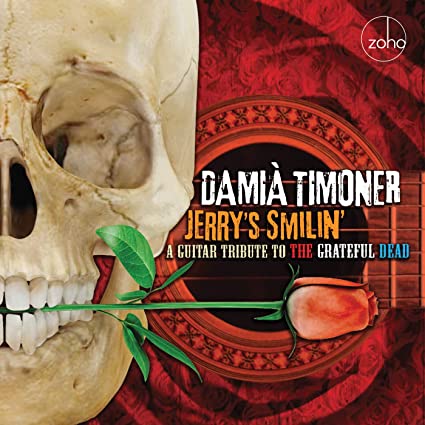 …you’ll find several other mellow performances when you SUBSCRIBE to Damià’s YouTube channel (as I did, right away).

Damià has a wonderfully relaxed approach to playing his guitar, as you’ll hear on his captivating performance of “Built To Last” (the Dead’s 1989 album’s title track for their last studio album).

Poignancy is (definitely) present on Damià’s rendition of “Loser“; as with many of Jerry Garcia’s tunes, it brings on strong visions for the listener… I couldn’t help but remember many long nights of truckin’ on down the road as I listened to this… DJ’s will be playing this song frequently!

I had no difficulty (at all) in making my choice for personal favorite of the ten tunes offered up for our listening pleasure… “Dark Star” really shows off Damià’s guitar mastery, and will be a favorite for many of you as well.

I give Damià a MOST HIGHLY RECOMMENDED rating, with an “EQ” (energy quotient) score of 4.98.  Get more information on the Zoho Music release page for the album.  Rotcod Zzaj