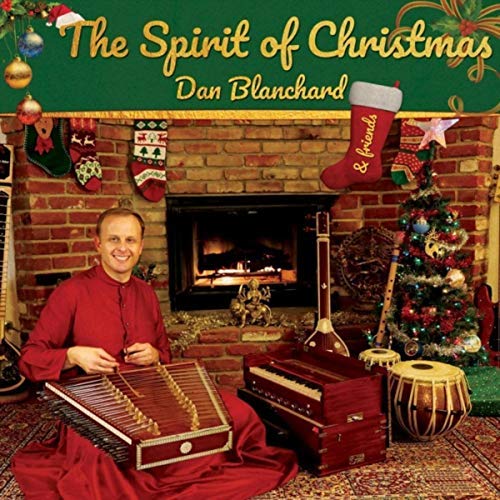 Strikingly different seasonal performances Dan Blanchard – THE SPIRIT OF CHRISTMAS:  Dan plays santoor, harmonium and keyboards, and is joined by Sheela Bringi on flute, Dave Cipriani doing Indian Slide guitar, Leonice Shinneman on the tabla, Deepak Ramapriyan on violin, Chris Votek on cello, Paul Livingstone’s sitar and Eddie Young on bass in one of the most pleasant (and different) “seasonal” sonic adventures you will ever listen to… and, in this case, you can watch the trailer put together for this fantastic release…

…as the video says, “you’ve never heard Christmas carols like this before”… you’ll be highly enchanted through the entire hour’s worth of wonderful music… and since you’re there already, be sure to SUBSCRIBE to Dan’s YouTube channel.  I did, because he has lots more music for you to witness there.

The beautiful sound effects on “Jingle Bells“, and the absolutely fun fusion of Eastern and Western music make the song one of the most unique listens you’ll ever have… the flute alone on this performance makes it worth the purchase of the album!

The absolutely fantastic weaves of cultural influences on the 5:29 “We Three Kings” will hold you (and your aural appendages) spellbound… I can (easily) see this song being nominated for (and WINNING) awards… be sure you listen to this one (all of the songs, actually) with your headphones on, because there are intriguing nuances through the entire performance.

Dan’s musical history is stunning in/of itself… he played heavy metal in his high school years, and was enchanted with bands like Queen… throughout his life, he has used various forms of music as therapy, and all of those experiences translated to the beautiful music he now puts together… the song that made me most enchanted on this album is a great example of how far he’s progressed… the wizardry he displays on “Joy to the World” clearly shows his high talent and energy for the healing that music can bring to the world; I just LOVED this piece!

I give Dan and his players a MOST HIGHLY RECOMMENDED, with an “EQ” (energy quotient) rating of 4.99.  Get more information at Dan’s website.       Rotcod Zzaj

Brilliant piano performances Ann Sweeten – Change Is in the Wind