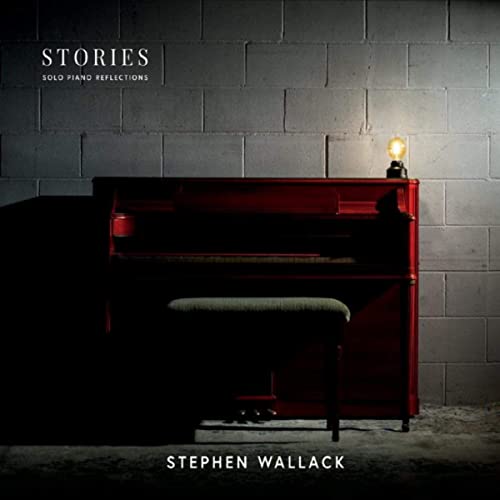 Pleasingly pretty piano tales Stephen Wallack – STORIES:  When an artist is able to create music that speaks directly to the audience, as pianist Stephen does on his most pleasingly pretty piano release, both the player and the listener benefit.  His second studio album can be listened to when you SUBSCRIBE to Stephen’s YouTube topic channel… there are other wondrous sonic adventures to enjoy there as well…

I’m not quite sure how Stephen manages to capture the “brilliance” of his keyboard so amazingly, but as you listen to the shimmering keys on the 4:00 “Rain“, you will hear exactly what I am talking about… I (most strongly) suggest you listen to this piece (as well as the others) with your headphones on, so you can catch every note… DJ’s on stations of all sorts across the globe will be choosing this song for regular rotations, I have no doubt!

Stephen has an ability that few other players do to convey the titles of his songs through his completely capable playing, as you’ll hear while listening to the 4:59 opener, “Sunrise“… it was a perfect tune to accompany my morning wakeup here in the Great Northwest; the full range of his keyboard is used to create new beginnings for your ears.

You will have visions of grand old hotels and hostels as you listen to the regal march on the beautiful “Excelsior“…  superior recording and Stephen’s masterful keyboard touch will make this a favorite for many!

It was one of the shorter songs (it clocks in at 3:55) that captured my vote for personal favorite of the ten tantalizing tunes offered up for our sonic adventure… simply titled “Children“, the exuberance and wonderment of youth is conveyed with superb skill and excellent recording.

Calming peaceful solo piano Pam Asberry – All Through The Night