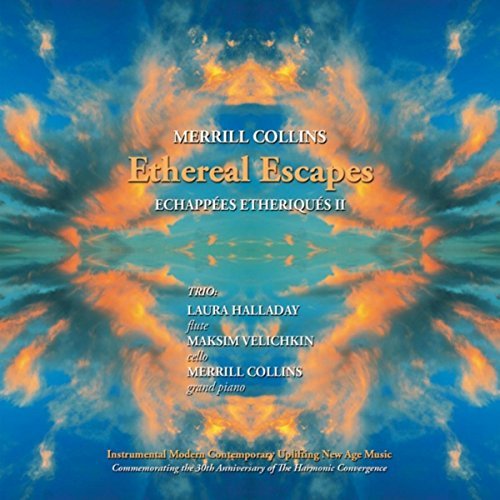 * merrillcollins ethereal escapes * Merrill Collins – ETHEREAL ESCAPES:  As many of you know, I review MANY piano works over the course of a year… this upcoming release (July, 2017) from Merrill is far more than “just another piano album”… her magical touch on the keyboards is complimented by flute from Laura Halladay and cello by Maksim Velichkin, and the fact that all sixteen pieces are original compositions only enhances the attraction for this listener.

Unfortunately, only one sample is up right now (I will come back and add the links in when the samples are up) – but “With Every Heartbeat” will give you a clear view of the intricacy and interaction between the three players… in fact, it sounds like they are right there in your living room playing for you… simple, but abounding with the beauty that music is supposed to provide for us all.  The other key element that must be mentioned is that their “pacing” is perfection… there is no “rush to musical judgement”, or overstatement in their playing… as I said – just beauty!

Merrill highlights in the liner notes that “my players often interact with each other like a musical conversation”, and she’s not just hyping the album with that comment… it’s really true, as you will realize when you listen to the sentiments expressed in the slightly dark tones on “We Heard Earth Weeping”… it’s very hard to play music like this without coming across as too maudlin (self-pitying), but the trio accomplishes their goal flawlessly.

It was the brighter sounds on “Riding on Waves of Gold” that I easily picked as my personal favorite of the 16 tracks… not only that it’s beautiful, but that the listener can “see” (aurally) the wonder that this world could be for them if they pursued music like this on a daily basis.  I give Merrill and her musical friends a MOST HIGHLY RECOMMENDED, with an “EQ” (energy quotient) rating of 4.99 for this excellent sonic adventure.  Get more information about Merrill and her music on her Spiraling Music Company page.             Rotcod Zzaj