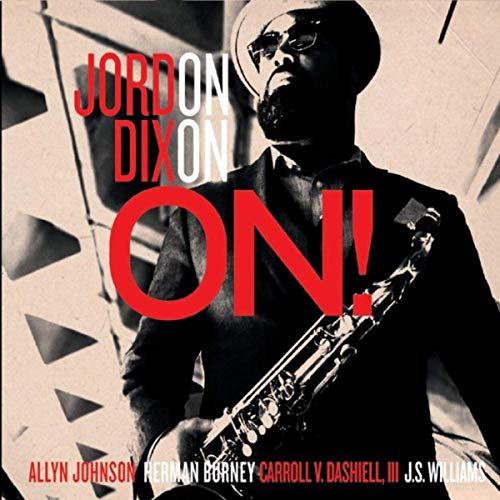 Hugely soulful sax led jazz Jordon Dixon – ON!:  You just haven’t heard superb sax work like this lately, folks… it doesn’t release until June, 2019, but features some very STRONG players… @allynjohnson88 on piano, @cvdiii on drums, @hermanburneymusicandphoto on bass and @jswilliamsmusic on trumpet, and they’re all right “ON”, so to speak… his tenor sax just SHINES on tunes like the 6:12 “Notes from the Nook“… I have NO doubt that you’ll be hearing this in MAJOR rotations on jazz shows ’round the globe.

Jordon started his musical journey at the ripe young age of 12, & by age 15, he was playing in clubs, getting his chops together… you’ll hear the clear evidence of just how well he “got it” via the title track, “On!“… beautiful piano intro segues (right at the :45 second mark) into a totally rockin’ tenor solo with lots of call/response with the other stellar players… I just LOVED this track, & have no doubt you will as well.

The 9:09 “Flame and Friction” starts off with some mighty mellow bass lines, & feels much like the late-night jazz cellars I used to haunt in Frankfurt, Germany, way back in my early days in jazz… for some reason, this reminds me of some of the Eddie Harris stuff I used to dig down into so deeply; a SUPERB jazz tune!

One thing that really stood out for me is that Jordon served proudly in the U.S. Marines (as a musician)… since I spent so many years roaming the world and absorbing the music all ’round the globe in the military, this means a lot to me… the power he absorbed during those years seems to come through in full force on the opener, “Notes from the Nook“… definitely an award-winning performance.

Of the ten songs Jordon offers up, the clear winner for my personal favorite is (without doubt) the laid-back performance on “She Meant it when She Said it“… what attracted me to it the most is the “pacing” of the piece… the use of the silent spaces to emphasize the emotions being portrayed is expert!

I give Jordon and his magnificent players a MOST HIGHLY RECOMMENDED rating, with an “EQ” (energy quotient) rating of 4.98 for this fine jazz adventure.  Get more information on Jordon’s website.            Rotcod Zzaj