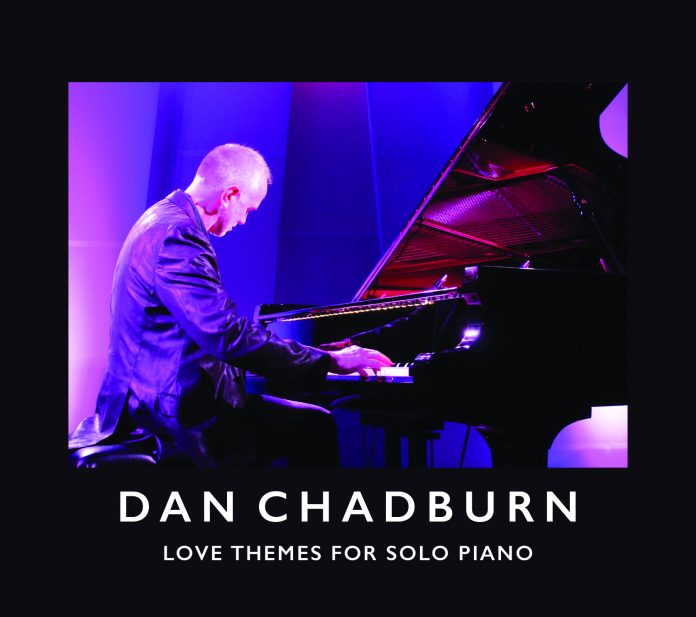 Expressive solo piano beauty Dan Chadburn – LOVE THEMES FOR SOLO PIANO:  It’s hard to believe it’s been nearly two years since I reviewed Dan’s wonderful “Held In The Light” CD, but come November 1st, 2019, it will be… I’m truly honored to have been quoted on the trailer for the new album, too…

…you will find a whole host of other live performances, including live concerts, for Dan when you SUBSCRIBE to his YouTube channel, as I did.

As you listen to Dan’s original songs, you will realize that you (and your ears) are quite privileged… that’s especially true on the one track that has samples available at this time… the 4:43 “Timeless” will transport you to a world where time is unimportant and beauty is ever-present… Dan’s use of ALL registers of the piano on this composition make it truly stand out from all the other artists vying for your aural attention!

“Cherished” demonstrates just how skillful Dan is at improvising, too… it’s among several of the tracks on the album that were done as “single takes”, recorded direct to the album… it takes absolute mastery of the instrument to make this happen as wonderfully as it does on the new release.

As I’ve said before in my reviews of Dan’s aural adventures, he is able to reach out through his keyboard and touch you with his playing; in these days of “canned” music, that’s a rare talent to have, and as he shows us on my personal favorite of the thirteen songs offered up for your listening pleasure, he is a master at using the “silences” in between the notes to draw you into his sonic spell… “Unconditional” celebrates the joy that love brings when given without imposing viewpoints or opinions on the one(s) you care about… I have no doubt that this song will be considered for (and WIN) an award!

I give Dan and his recording crew a MOST HIGHLY RECOMMENDED rating, with an “EQ” (energy quotient) score of 4.99 for this absolutely enchanting album.  Visit Dan on the Dan Chadburn home page to get more information.        Rotcod Zzaj