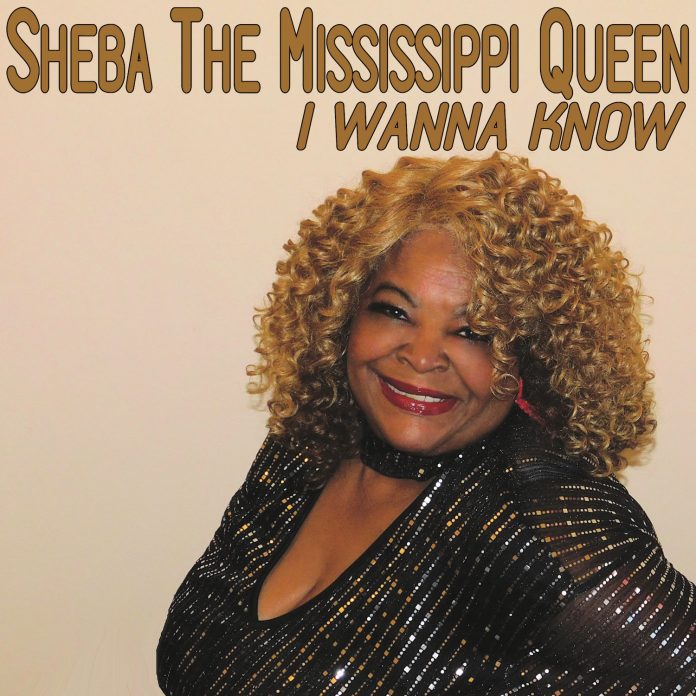 Exciting down home blues Sheba The Mississippi Queen – I WANNA KNOW:  About ten days ago, I got my introduction to Sheba’s exciting down home blues when I reviewed “Backroom Blues, Vol. Ten” from our friends at Bongo Boy Records, where Sheba’s song “Keeping What I Got“, the first single on her upcoming album (titled “This Is The Blues”, to be officially released on 27 August, 2021), got high marks from me… and yesterday, Sheba’s second single for an upcoming album arrived in my queue  – and it’s an absolute KILLER blues, folks.

Sheba’s players are astounding, and fully qualified to belt out those good ol’ blues… Greg “Wolfman” Schleitwiler playing keyboards and Charlie Hubel on harmonica join Sheba’s core band, The Bluesmen…  Keith Caton – guitars; Bill Story – keyboards; Gary Pope – bass guitar and Ernesto Pierson doing drums all rock the house.  In fact, they’re so good on this tune that it’s been submitted to The Recording Academy™ for consideration for the upcoming 64th Grammy Awards®!

Even if you’ve never been way down in to Mississippi, where I sorta’ “grew up” with the blues, Sheba’s heavy-duty throaty vocal will pull you right into the feeling as she blows you away with her soulful blues… her lively style reminds me in some ways of Tina Turner on the song Undercover Blues, but there’s far more Chicken Shack in the performance on this superb single.

I give Sheba and all her players a MOST HIGHLY RECOMMENDED rating, with an “EQ” (energy quotient) score of 4.99 for this excellent prelude to the album release.  Get more information on Sheba’s website at Bongo Boy Records.                    Rotcod Zzaj