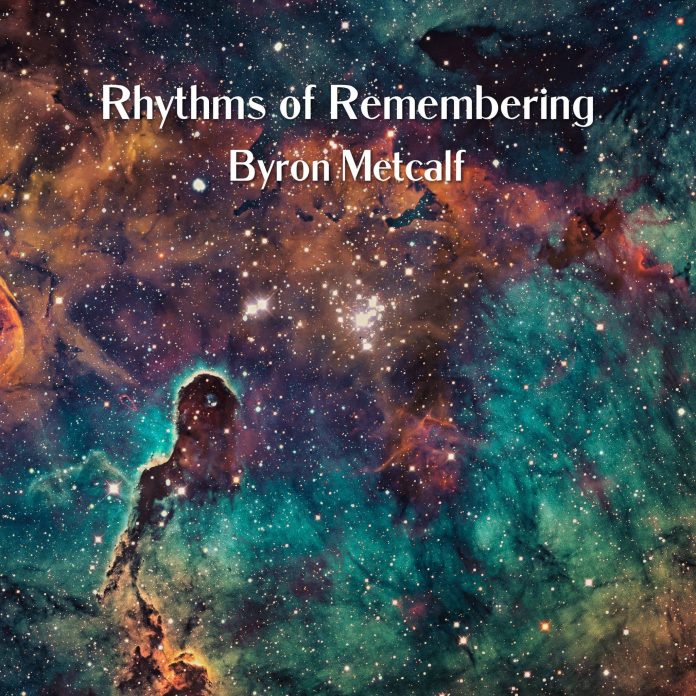 Amazing percussion memories Byron Metcalf – RHYTHMS OF REMEMBERING:   The pandemic has affected us in so many ways, but for master percussionist and ceremonial leader Byron Metcalf, it helped him to create the most amazing percussion memories you will ever hear… it’s been a while since I reviewed him with stunning vocalist Jennifer Grais on “They Were Here” in December 2017; before I start my review for the new album, I strongly recommend that you watch their promo video for that album…

If you want to watch many more performances of Byron’s masterful sonic and visual creations, be sure you SUBSCRIBE to the Byron Metcalf YouTube channel… I did it immediately.

I will tell you right now, Byron’s time and creativity in the studio, as he said to me, “served as fuel for the muse“… for this reviewer, one of the most pertinent examples of that was on the gentle movements and echoes you’ll hear on “Seasons of Shifting Recall“… Erik Wollo’s synthesizers and guitars on this performance blend perfectly with Byron’s percussive visions to give you images of the penetrating sands of time… if any song should be considered for an award, it is this one… and I predict that it will win awards!

My long-time musical friend and flutist Sherry Finzer joins Byron on the closing performance for the album, “Another Way Home“… when her flute joins with synth/strings from Frore (Paul Casper) at about the 1:23 mark, you’ll experience deep emotional impressions of the beauty of travel and returning to your roots… the “pacing” is pure perfection, and the song is among the most calming I have listened to (yet) in 2021.

It was the strong and powerful sense of flow and action on “The Fifth Reflection” that made it my personal favorite of the seven songs offered up… Erik Wollo’s percolating synthesizers and Byron’s stimulating percussion on this performance will hold you captive from the opening note to the closing bar… I can’t recommend this strongly enough… absolutely marvelous!