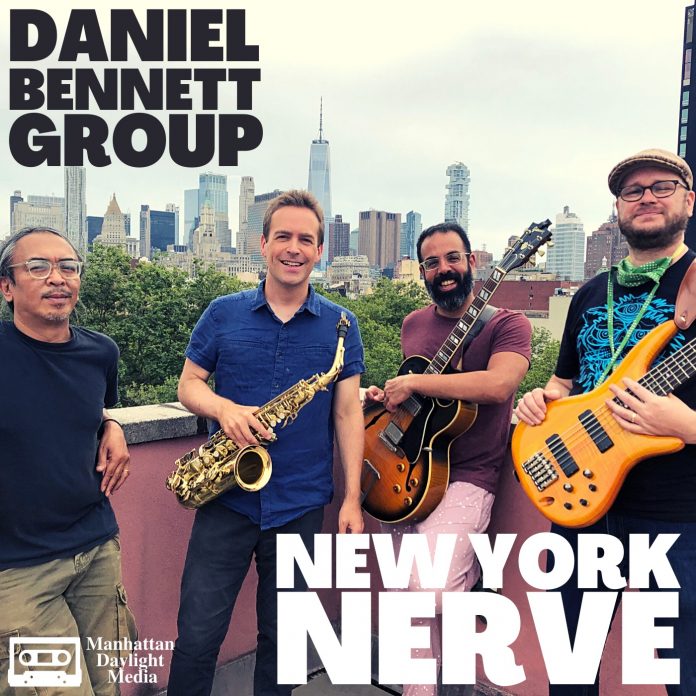 Absolutely unpredictable jazz energy Daniel Bennett Group – NEW YORK NERVE:  It’s been nearly 3 years since I reviewed “We Are The Orchestra” from multi-instrumentalist (saxophone, flute, keyboard and clarinet)  Daniel… this new release has a very entertaining promo clip that will give you a taste of their musical skills…

You’ll also find MANY more high-energy performances when you SUBSCRIBE to The Daniel Bennett Group channel on YouTube.

In addition to Daniel’s playing on multiple instruments, you’ll also hear Assaf Kehati playing guitar, Kevin Hailey on bass and Koko Bermejo doing drums… their performance on tunes like the 3:37 “The Town Supervisor” is definitely different that the track title might imply… I predict this song will be getting lots of airplay!

Assaf plays some masterful guitar licks in, ’round & through “Rattlesnake“, and Daniel’s reeds just wail on the piece… they give you some imagery of high plains and dusty drifting cacti that is totally engaging.

I had no doubt what my choice for personal favorite of the six songs was going to be after my first listen through the album… “Human Playback” clearly reveals why the group was awarded “Best New Jazz Group” by New York City Hot House magazine!

Daniel and his high-energy, high-talent players get a MOST HIGHLY RECOMMENDED rating from me, and an “EQ” (energy quotient) score of 4.99 for this very interesting album.  Get more information on Daniel’s website.                          Rotcod Zzaj