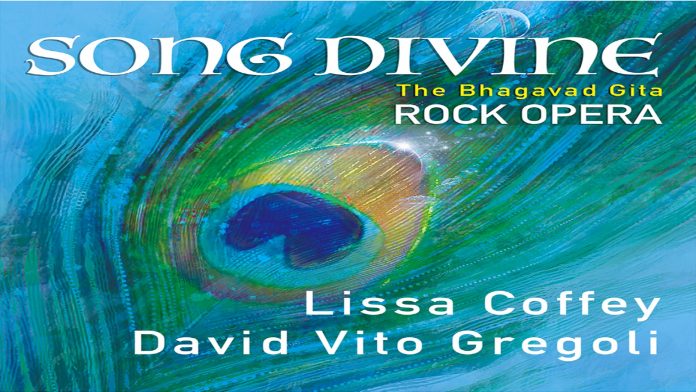 Absolutely amazing ancient truths Lissa Coffey and David Vito Gregoli SONG DIVINE – THE BHAGAVAD GITA ROCK OPERA:  The Bhagavad Gita, in event you didn’t know it, is the second-best-selling book and the second-most-translated book in the world… the dilemma is that until now, there has never been a translation that keeps the rhythm and rhyme of the original… Lissa accomplished that and worked together with our long-time friend David Vito Gregoli to make it an experience that would bring the absolutely amazing ancient truths to LIFE… listen to Lissa as she explains her work on the album…

If you find yourself interested in what Lissa had to say, I (most strongly) recommend that you SUBSCRIBE to Lissa’s YouTube channel, where you’ll find several intriguing performances and shows.  You should also SUBSCRIBE to Vito and Dharmapala Records on YouTube to discover the myriad of styles Vito plays in.

You don’t have to be a “believer“, or “religious” in order to feel the power and beauty of songs like the opener, “Life’s Lament” (samples will be out near the end of October, 2021, and I will link them in when I’m told they are ready)… the magical weave of organ and Indian instruments isn’t a “normal” merger, but it really works as we hear the warrior Arjuna seeking Krishna’s guidance before he goes into battle with an enemy he doesn’t really want to to go to war with… “This opponent is not my enemy – These opponents are my family“!

Shades of our greatest rock operas (Jesus Christ, Superstar and Hair, for example) abound, but one of the best songs in that vein is “One Thing I Can Do”, a powerful dialogue between Arjuna and Krishna about the quandary of his social responsibilities… the music will have you up and dancing in only moments with the joy of revelations revealed.

Driving beats on “Lotus in the Pond” hammer home the message of words that are timeless and full of wisdom… (which is why I chose the entire album for permanent placement on my iPhone placement – something that only happens with the very BEST music)… “The lotus rests above the pond, Unwetted by the water, Rise above desire (temptation) and Your faith will become stronger“… I have (absolutely) no doubt that this 5:46 gem will be constantly plugged into playlists ’round the globe!

Lovely piano and flute open the wonderful “Spark From Me”… the recording is flawless, and the words/vocal are filled with a spirit of reverence for higher beings… this song is already getting hit with “replay” often here in my Zzaj listening studios.

I had no difficulty in making my choice for personal favorite of the eighteen exciting performances offered up… the 6:05 “Field and Knower” reveals the power of nature and spirit when they are combined for the good of all in the universe… this song definitely merits an award!