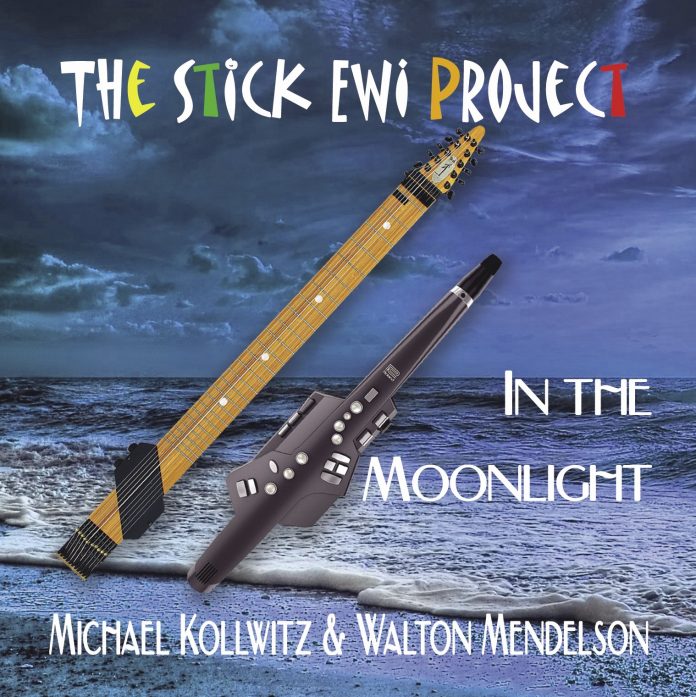 Unexplored musical horizons The Stick EWI Project – IN THE MOONLIGHT:  As many of you know, I’ve been reviewing Michael Kollwitz’s marvelous mastery of the Chapman Stick® for quite some time now, most recently for his “Serenity II” album, and have been totally enchanted by everything he’s created… when he asked Walton Mendelson to join him by playing EWI (electronic wind instrument) for this new project, things got even more magical… even for seasoned listeners, these will be unexplored musical horizons.

The EWI is a brand-new experience for me (and that’s really saying something, because I’ve dug down deep into instruments of all sorts over my many years of reviewing music)… the EWI is played somewhat like a clarinet and, interfaced with a
synthesizer, produces the sounds of violins, woodwinds and brass instruments while preserving all the expressiveness of a saxophone or flute… when joined with Michael’s amazing talent on the Chapman Stick®, tunes like “Summer River Day“, you’ll be just as highly impressed as I was; it’s almost like having a WHOLE jazz band playing for you right in your living room… I believe this tune will be getting HUGE amounts of airplay in the coming months and years!

The rich and lush tones the duo produce on the beautiful title track, “In The Moonlight“, will give you images of those laid-back moonlit nights that you will treasure forever and ever… a most pleasant sonic experience.

The oddly-titled “If It Ain’t Baroque Don’t Fix It” pairs Michael’s deft fingerings on the Chapman Stick® with some of the most enchanting string sounds from Walton’s EWI, and will provide hours and hours of joyful listening!

Of the dozen songs Michael and Walton offer up, though, my choice for personal favorite was easy to make… it’s the closer, “Panama Heat“… their “pacing” on this piece is pure and perfect, and their total mastery of their respective instruments makes the entire album a total winner.

I give Michael and Walton a MOST HIGHLY RECOMMENDED rating, with an “EQ” (energy quotient) score of 4.99 for this tantalizing sonic treasure.  Get more information on Michael’s website when the album is officially released.          Rotcod Zzaj