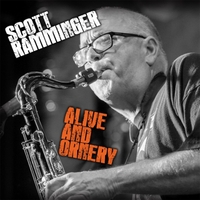 Scott Ramminger rockin’ groove blues Scott Ramminger – ALIVE & ORNERY:  You get over an hour-&-a-half of Scott’s unique brand of rockin’ groove blues on this fantastic 15-tune sonic adventure… I’ve been reviewing his music for many years now, most recently in issue # 139 – so, it’s been a while!  As you listen to tunes like the totally down & FUNK-ee “Funkier Than Him“, (recorded live), you’ll be “with” him in the “right now”, & fall in love with the (sometimes) renegade postures you can imagine him in as he sings & blows his tenor saxophone… he’s also joined by a stellar cast of solid players… Pete Ragusa on drums; Chris Brown on bass; Vince McCool on trumpet; Clarence “The Blues Man” Turner, David Kitchen, and Keith Grimes on guitar; Wes Lanich and Ariel Francis on keys… this is truly a performance you’ll never forget (& I’ve no doubt it will stay on your iPhone for those long road trips as well)… the guitar solo on this track alone makes it worth the album purchase!

That same hard-rockin’ energy you heard him do on some of the tunes in the video really comes home to roost on “Josephine“… if that song doesn’t kick yer’ grits, you ain’t got a southern bone in your body, lol!

After my initial listen (with headphone ON, of course), it was easy to pick my personal favorite of the 15 songs Scott put together for your groovin’ & dancin’ energy… “Nasty Habits” sounds just like the dirt-floor roadhouses I used to haunt (way back, a long LONG time ago) ’round Huntsville, Alabama… of course, Scott KICKZ it all the way through, but all the other players were blowin’ down hard as well.  I give Scott & his heavy-duty krew a MOST HIGHLY RECOMMENDED, as well as a (perfect) “EQ” (energy quotient) score of 5.00… meaning this also gets my PICK for “best live blues & R&B recording”.  Get more information about this great player at Scott’s website.         Rotcod Zzaj