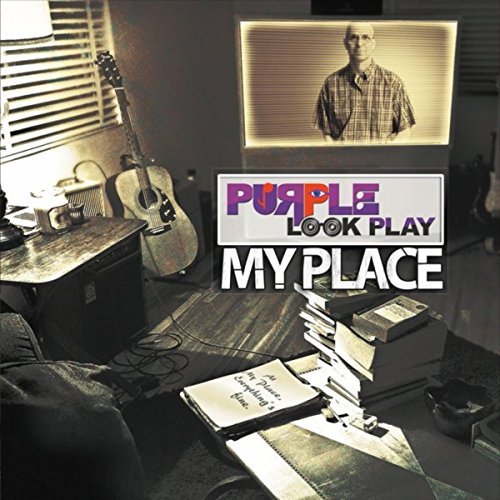 stratospheric punk rock Purple Look Play – AT MY PLACE:  When I first started my IMPROVIJAZZATION NATION magazine (still up & running) in 1988, this was exactly the kind of music we were reviewing… the BIG difference, though from what Jay Banwell, the leader of this group, is creating here & those earlier submissions is that it is much clearer & cleaner than many of those home-taper submissions were; as you listen to the frenzied pace on “Don’t Stop“, you’ll understand what I’m talking about… Jay’s bass propels this tune into the stratosphere, and his band-mates (Peter Moore on keyboards & piano; Terry Olson doing guitars; Shareiff Robinson doing production & engineering; Jim Ryan on drums; Ray Lee hangin’ in studio to encourage the players & Peter Thomas on drums – you can read much more about each of these players at the Purple Look PLay ABOUT page).

Another cool thing about this band is that they’re able to “switch gears”, so that it’s not all “just grunge”… a great example of that is “Dedication“, which has some superb piano lines running against the vocal… the lyrics are nicely crafted, too… some of the rhyming is a bit heavy on this one, but OTOH, ain’t that what great rock is really all about?  Great tune, with an ultra-cool vibe & fine synchronized guitar lines!

One of the things that’s a definite requirement (in this reviewer’s experience, anyway) for a rockin’/punk style band is that they have to know how NOT to get “drudged down” in syrupy lyrical repeats of all the other R&R songs, and – more importantly – to have FUN with the music… just scope out one of my personal favorite tracks on this ten-song outing… even though it’s really short (2:37), “Theme of the Surf Detective” shows their riotous glee at smokin’ folks – AND, it has one of the best guitar leads I’ve ever heard on a rocker… my only complaint is that it coulda’ stood to be (maybe) a minute (or so) longer… but from a musical perspective, you’ll definitely hear their high-talent, high-energy & dedication to perpetuating the JOY of being FREE… lol!

The song that captured my vote for personal favorite, though, is the longest on the album (6:54)… “You’re Off My Mind” took me back years to groups from some of the most epic best R&R/Punk groups (think “The Who”, mayhaps)… all the players pull out the stops on this one to show their abilities… punchin’ drums, excellent meshes of the instruments and vocals & pure RAW energy. If you’re lookin’ for a change of pace from your “ordinary jazz & blues” listening fare, this comes HIGHLY RECOMMENDED, and gets an “EQ” (energy quotient) rating of 4.98 from me.  Get more information at the aforementioned ABOUT page.  & keep your ears peeled, I’ve no doubt you’ll be hearing much more from Jay & his krew (they’re already working on a third project)… fun, fun, FUN!    Rotcod Zzaj