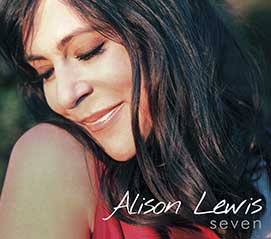 Alison Lewis – SEVEN:  This debut album almost didn’t get reviewed, because it’s under 30 minutes, more like an “EP”… of course, I DO listen to everything I’ve added to the queue – and that’s because my initial listen told me that the performer(s) had something “real” to offer; in Alison’s case, it is her penetrating (almost haunting) vocal work that rescued it from the “non-review” stack… as you listen to her sing her take on Dylan’s “Like A Rolling Stone“, you will have no doubt why she just HAD to be reviewed here… the word that immediately comes to mind as I listen to her sing this is “POWER”… a true vocal talent that you’ll only encounter once or twice in your lifetime.

Alison also performs a couple of her originals on this release, too, most notably “Mr Right For Right Now“… her lyrics are exquisite, but it’s her projection on the vocals that makes me believe you’ll be hearing much (MUCH) more from Ms. Lewis in the coming couple of years… among the best “jazz/blues” tunes I’ve heard (yet) in 2017 – and that organ is KILLER.  The only critique I have is that this album should have probably had (at least) two or three more songs on it, maybe around 35 or 40 minutes worth in total.

My final thought is, as always, my personal favorite of the tracks offered up; in this case, it’s another original from Alison – “Seesaw“… both lyrically and performance-wise, this one certainly merits the MOST HIGHLY RECOMMENDED I’m giving it, as well as an “EQ” (energy quotient) rating of 4.98.  Get more information on this rising star at Alison’s website.        Rotcod Zzaj