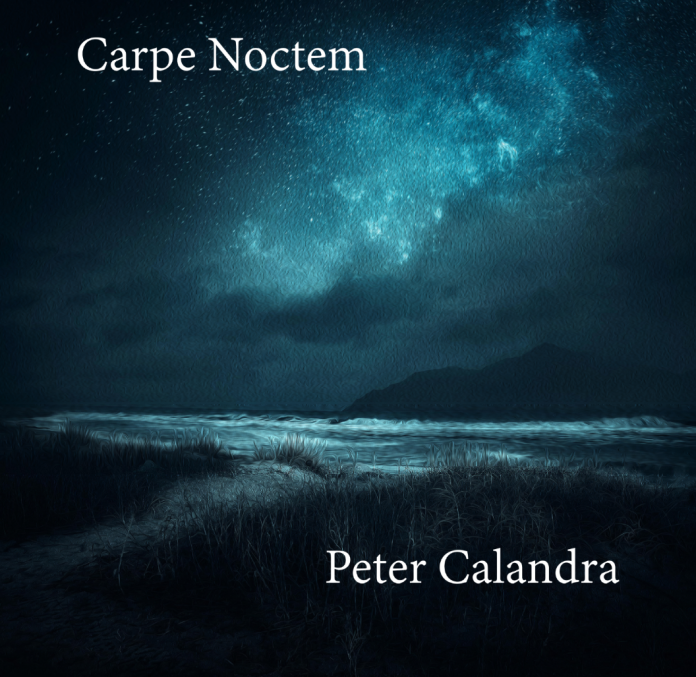 Powerful universal beauty Peter Calandra – CARPE NOCTEM:  As I sit here on this slightly overcast Pacific Northwest morning, I’m listening to Peter’s latest sonic wonder, and am totally in awe of the powerful imagery he has realized through his creations… songs like “Aurora Scanderé (Dawn Rising)” use soulful string weaves and gentle rhythmic percussion to wake your spirit to the beauty the universe holds in store; the bells and chimes he has woven into this piece will speak to you in ways you never thought possible – an amazing composition.

The opening salvo, “Agnus Dei (Lamb Of God)“, will hold you spellbound… exquisitely expanding strings and voices that give new meaning to “ethereal”… the video created for this excursion is one you will find yourself watching over and over again…

…I am not one for “organized religion”, but this stunning creation will remind you that there are higher powers at work in the universe… the mesh of music and imagery on this superb creation will be recommended for awards – and WIN them, I’ve no doubt!

I have reviewed many of Peter’s works, most recently his “The Road Home” album, which won the One World Music Radio 2017 “Best Contemporary Instrumental Album” (just as I predicted in my review)… I firmly believe that Peter’s “Ars Vitae (Art Is Life)” will make him a winner for 2018 as well… again, the integration of angelic voices against strings and harp sounds is so captivating that you won’t be able to stop listening to it over and over… it conveys the joy of living and makes you feel like you are with the angels.

I actually had to listen through this eleven-song album eight times before I was able to choose my personal favorite – that’s because all of the pieces are so powerful – “Sacrum Spera (Sacred Trust)” reaches down deep into your soul, reminding you that our bond with each other is the force those higher beings were trying to inspire in us… the sonic visions on this masterful release will help you to meet that challenge.  I give Peter a MOST HIGHLY RECOMMENDED, with an “EQ” (energy quotient) rating of a (perfect) 5.00 for this wonderful album.  This isn’t set to release until August, 2018, so check Peter’s website for updates.         Rotcod Zzaj