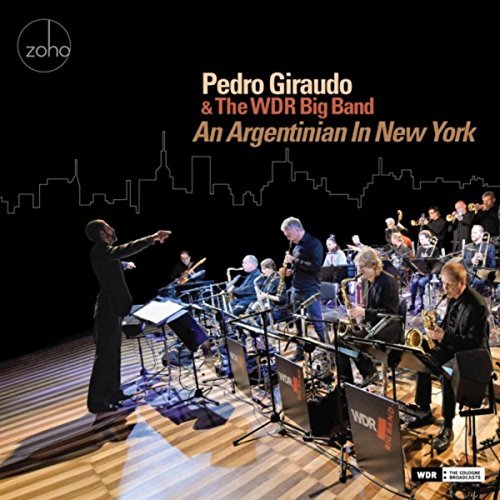 Pedro Giraudo & The WDR Big Band exciting original compositions Pedro Giraudo & The WDR Big Band – AN ARGENTINIAN IN NEW YORK:  This must be “big-band month”… Pedro doesn’t play bass on this album, as he did when I reviewed him in issue # 163, but his superb energy communicates through the band just as vibrantly (if not more-so) on this exciting collection of original compositions… just listen to the high-energy opener, “Mentiras Piadosas” (which translates as “White Lies”), and you’ll realize that your ears are in for a supreme big-band treat… an amazing song, and the fact that it’s a live performance certainly adds to the elan conveyed for the listener.

As an added bonus, it’s also possible to VIEW this performance via their YouTube video, though I would caution that the recording quality on the album is far better… nevertheless, it’s wonderful that you can see them in live action…

If you’re looking for a truly rousing big-band sound, you’re in luck… you’ll fall in love with the contrast between the themes in “Lapidario” (merciless)… it definitely expresses a “take no prisoners” feeling… in point of fact, it’s one of my personal favorite tunes (yet) in 2018.

Though Pedro wrote “Desconsuelo Suite” (Disconsolation Suite) over ten years ago (in 2006, to be exact), it’s three movements, along with an introduction, are masterful writing, no doubt… of the three major movements, it is the fury expressed through the closing track on the album (and the suite), “La Bronca” (The Rage) that just blew my ears away… this piece gives you the same feelings of pain (and dealing with it) that we all have (sometimes) in our lives… great recording and superb performances from each of the players in the band make this a most memorable album.

I give Pedro and the band members a MOST HIGHLY RECOMMENDED, with an “EQ” (energy quotient) rating of 4.99 for this excellently crafted album.  Get more information on the Zoho Music page for the release.          Rotcod Zzaj

Buoyant blistering blues Sheba The Mississippi Queen – This Is The...