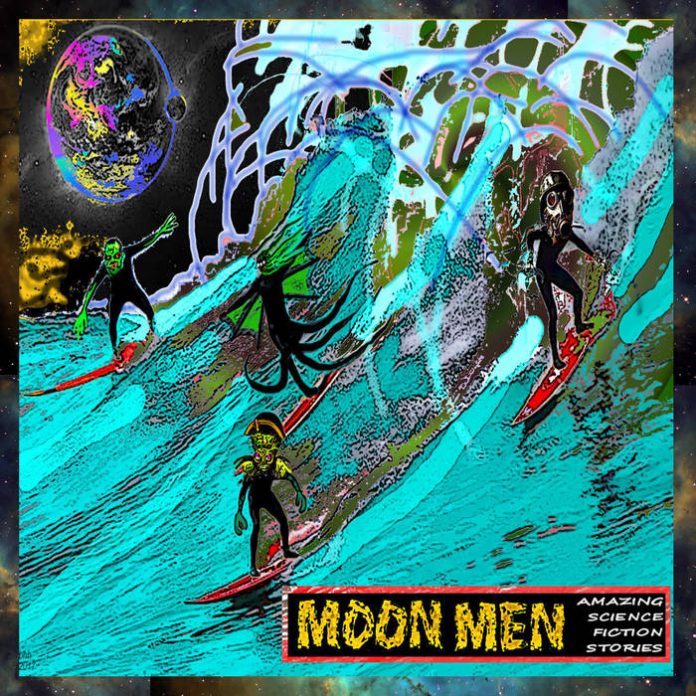 Moon Men challenging experimental structured improvisation Moon Men – AMAZING SCIENCE FICTION STORIES: We’ve all heard th’ buzz… on th’ netz, ’round th’ block, even (mayhaps) on other planetary entities – MOON MEN are coming… my longtime musical pal Bret Harold Hart (we go way back to the 20th Century) sent me a copy of this delightfully jaded Limited Edition (only 300 or so were pressed) release, featuring DIY/prog vets Bret Hart (‘Admiral Eschaton Crater’), Jerry King (‘Sgt Cthulhu Moone’), Dave Newhouse (‘Major Dom Fook’), and William Jungwirth (‘Billzilla’), ‘coz he knew it would transport me “bigly”… & so it did, so it does – so it WILL take you on the tour of as-yet unknown tesseracts and wormholes… just listen to & watch their outta’ sight antics on the YouTube trailer for the release, and you’ll hear what I’m raving about…

Their punchy & straight-ahead rawkin’ on tunes like the opener, “New Moone“, will definitely carve out a few craters in your head – OR, take you on an interstellar cruise the likes of which you’ve never realized even existed… totally dug this one!

If you’ve never been “down” before, I’ve no doubt “Dismal” will give you all the grief you’ve been searching for… this song definitely takes me back to the time (eons ago, it seems now) I first encountered Bro’ Bret in Pyong-taek (ah, but that’s another story, for later, aye)… the complexity these Moon Men have woven into their sonic tales will absolutely astound your ears… it’s the kind of tune you can listen to 1000’s of times, & then discover something brand-new when you listen to it next time!

There is, without doubt, no more challenging a listen (in this world, anyway) than “Horrible Circus Experience“… it will bring back every mem’ry of twisted cotton candy wound up in your curlies you’ve never wanted to have; seriously, though, this is my personal favorite of the fourteen decidedly “different” tunes offered up… pure wizardry in the mixing, with crystal-clear visions of the world as it will be.  I give these tone masters a MOST HIGHLY RECOMMENDED, with an “EQ” (energy quotient) rating of 4.99 for this release.  Get more information and purchase at the Moon Men BandCamp site.        Rotcod Zzaj