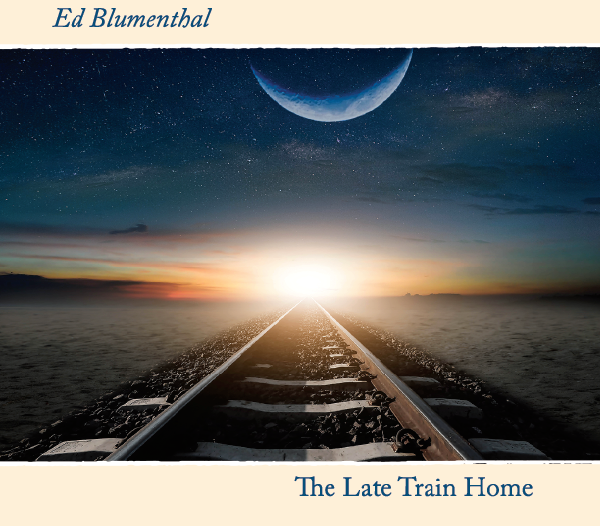 Mesmerizing piano harmonic wonders of Ed Blumenthal – THE LATE TRAIN HOME:  Composer Ed Blumenthal was certainly in the “best of company” when he performed and recorded these mesmerizing piano tunes at (what I consider) the best studio in the world, Will Ackerman’s “Imaginary Road” in Vermont.

Ed told me (in private email) that “I don’t claim to be a musician (or even a pianist)”, but I can tell you right now, in order to use the piano to create such beauty, especially with top-talent players like Charlie Bisharat on violin; Eugene Friesen playing cello; Jill Haley doing English horn; Noah Wilding on voice; Premik Russell Tubbs playing EWI Wind synth; Tom Eaton doing NS bass and Will Ackerman on acoustic guitar, Ed has both high talent and unique abilities.  The album doesn’t hit the streets until sometime in June, so samples aren’t available (yet), but I will come back and add them in as soon as I’m told they’re posted.

One of my favorite tunes on the album is the pensively moody “The Hands We Hold”… after a deep-toned piano introduction with heavy overtones, the violin joins in most complimentary fashion, and the bass work really helps to surface memories you might have thought long lost… I can (easily) see this piece being nominated for (and WINNING) awards!

The opener alone, “Who Knows”, makes the album well worth purchasing… that’s partially because it’s the longest cut (clocking in at 6:00), I suppose, but the expressiveness with which Ed performs just “invites” the other players to join (ever so gracefully) in the joy of the composition… his pacing is pure perfection, and his touch is full of life on the keyboard.

One of the most unique pieces I’ve heard (yet) in 2019 is “The Sea Sings”, on which Tom Eaton mixed in the Zadar Sea Organ (Zadar, Croatia) (which uses a set of marble steps that join the land and Sea with concealed tubes that produce magical harmonic tones when the Sea water rushes in) with Ed’s simple, yet powerful, piano solo… I have no doubt this song will get major airplay around the globe!

My personal favorite of the ten songs Ed offers up is “We Walk On”… the left-hand touch is very sensitive, and draws the listener in with ease… it’s not a terribly complicated piece, but the magic abounds… I just LOVED the vocals on this one!

I give Ed and all his players a MOST HIGHLY RECOMMENDED rating, with an “EQ” (energy quotient) score of 4.99 for this sonic adventure.           Rotcod Zzaj