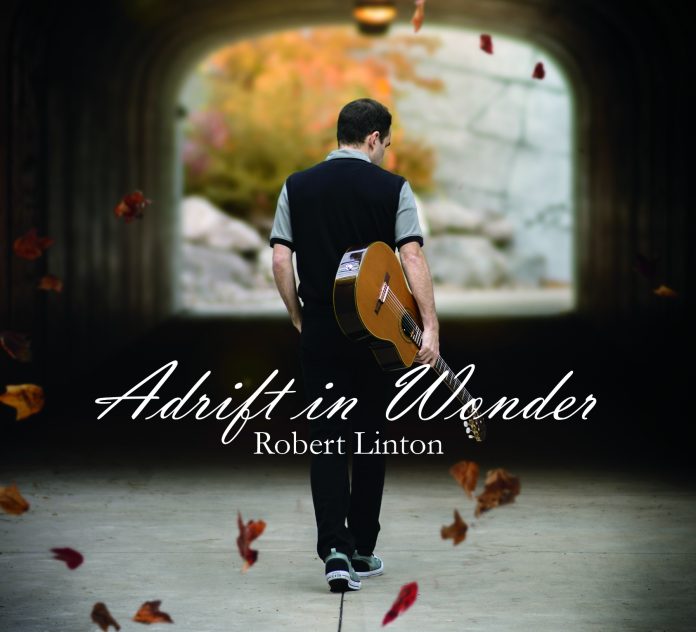 Meditative guitar magic Robert Linton – ADRIFT IN WONDER:  I’ve been mightily impressed with Robert’s guitar magic ever since I first encountered his work… my latest review of his playing, in issue # 161, gave him high marks… his new release has a sense of wonderment and gentleness that is perfectly suited to meditation.  I originally did not have the “trailer” video, but Robert graciously sent the link for it… be sure and watch it…

…the videography is just amazing, isn’t it?  Be sure to SUBSCRIBE to Robert’s YouTube channel, so you can see new songs as he puts them up… I did.

Now, let’s move on to the album… Robert’s compositions are truly timeless, and will haunt your memories (most pleasantly) for months & years to come… the integration of his other players ((Sara Milonovich(Violin), Premik Russell Tubbs(Alto Flute, EWI), Eugene Friesen(Cello) and Jill Haley(English Horn)) is seamless on pieces like the beautiful “Traces of Reflection” (no samples available at this time, since it doesn’t release until April, 2019 – I’ll come back and add the links as soon as I’m told it’s ready)… this isn’t just “mellow playing”, it’s a fully integrated tune that will bring back memories of (both) sadness and joy… among my favorites (yet) for 2019.  I wouldn’t be (at all) surprised to see this song nominated for (and WINNING) an award!

You get (just over) an hour of music that touches your soul in the deepest recesses… that’s particularly true of “Murmur of Chimes”, where overtones abound… you’ll be very impressed with Robert’s fluid dexterity on this composition… at 5:46, it’s a perfect length for airplay, and I predict it will achieve major rotations on stations across the globe.

It only took me one listen through the entire nine (long) songs to know that my choice for personal favorite is “Sifting Through Daydreams”… that title is so “on the money”… of course, it’s the beauty of Robert’s beautiful playing that makes the piece so memorable… at nearly nine minutes (8:56), it’s also the longest on the album.  I’m continually amazed as I listen to this song (over & over again); new memories surface every time I hear it.

I give Robert a MOST HIGHLY RECOMMENDED rating, with an “EQ” (energy quotient) score of 4.99 for this very collectible release.  Get more information at Robert’s website.       Rotcod Zzaj