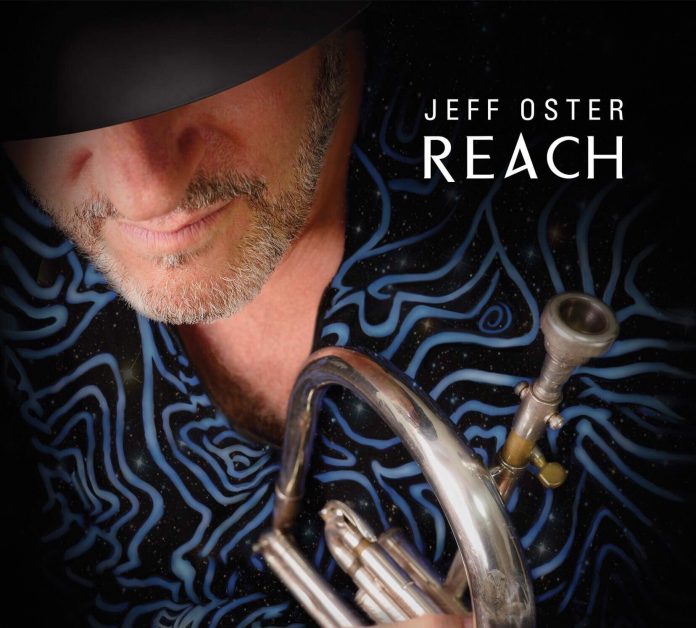 Masterful pertinent contemporary fusion Jeff Oster – REACH:  I’ve been a fan of Jeff’s excellent trumpet and flugelhorn work for many years now… I first reviewed him in issue # 118, where he got a “PICK”, and on many other albums… my most recent review was of a live show he did with F.L.O.W. (up in Seattle), where I got to meet him (Trump shirt & all, lol)…

Jeff’s new release doesn’t officially come out until later in 2018 (October), so there won’t be sample links until he tells me it’s gone live… in the meantime, though, I can tell you that you’re going to fall in love with his 5:27 aural sketch of the “Five Great Mountains” (in China)… he’s joined by stellar players (I would expect nothing less) who help to invoke the attitude of worship this song brings to your consciousness.. Ruslan Sirota – keyboards, vocals; Robin Ghosh – guitar; Benjamin Shepherd – bass; Tamir Barzilay – drums; Pete Korpela – percussion; Jenni Asher – Erhu; Ravichandra Kulur – indian flutes and Drew Allsbrook – vocals – the percussion on this piece helps to set the mood for your journey to inspiration, and Jeff’s horn leads the way.

You’ll actually “smell the hip” as you listen to the lively and upbeat strains on “Troppo y Boffo“… & if you’re so inclined, you will be up on the floor dancing through those dew-covered tulips… I just love this song… it’s earned a permanent spot on my iPhone player…

The 5:52 closer, “The Pink City” (Jaipur, in India), has marvelous undercurrents floating in, under and around Jeff’s mellow horn, with lots of other instruments inviting you to treasure this wonderful sonic journey… I’ve no doubt this song will be considered for (and WIN) an award – it certainly merits one.

My personal favorite of the nine songs offered up for your aural edification was easy to pick… the gentle bell intro/weave on the longest composition on the album, “The Lotus Within“, will help to bring purity and shimmering joy into your life and those who surround you on your journey; the pacing and recording quality are top-of-the-line… you will find yourself listening to this wonderful song over and over again.

I give Jeff and his musical compatriots a MOST HIGHLY RECOMMENDED, with an “EQ” (energy quotient) rating of a (perfect) 5.00… meaning it also gets my “PICK” for “best inspirational album”.  Get more information as it becomes available on Jeff’s Website.             Rotcod Zzaj