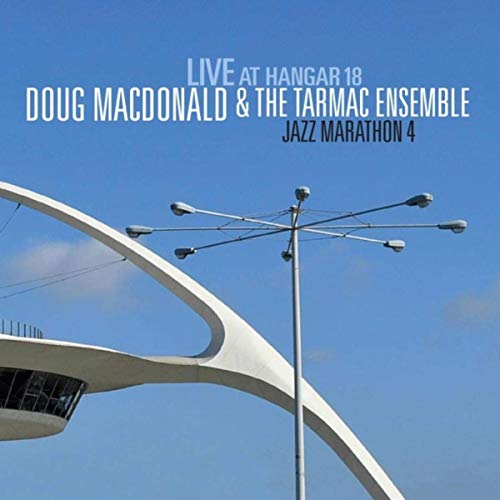 Allstar inventive jazz sessions Doug Macdonald – JAZZ MARATHON 4/LIVE AT HANGAR 18:  When it comes to all-star inventive jazz sessions, it just doesn’t get any better than jazz guitarist Doug Macdonald and his musical pals… my last review of his work (he’s a frequent hit here) was for his “Califournia Quartet” album, and this release is even better, because it’s a double album.  There’s an EXCELLENT trailer that will give you a real feel for Doug and his players too (from the sessions; you’ll also find the player list there)…

…you’ll find several other videos of Doug and his mates (as well as other groups) by SUBSCRIBING to the Scholz Productions YouTube channel, too… DO it – I did.

The album kicks off with a stunning original from Doug titled “San Fernando Blvd“… his guitar leads just smoke it, but he’s totally cool with letting (all) the other players have their space, too… the interactions between Doug’s guitar and the mellow flute make this tune a total WINNER!

The group’s (long – 10:38) rendition of Herbie’s “Maiden Voyage” is among the best I’ve ever heard, and the LIVE setting makes it a performance that will be getting MASSIVE airplay on hip jazz stations ’round the globe.

After listening through the double album twice, it was clear that my personal favorite of the sixteen tunes offered up is another original from Doug… “LL” clocks in at 9:38, providing lots of room for each player to get creative… an “instant hit”!

I give Doug and all his players a MOST HIGHLY RECOMMENDED rating, with an “EQ” (energy quotient) score of 4.99 for this treasure of an album.  Get more information on Doug’s website.        Rotcod Zzaj