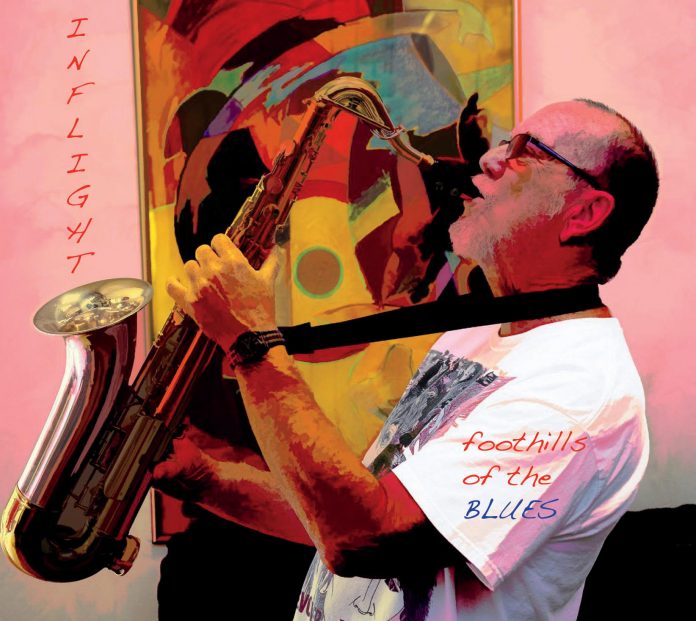 Gutsy down dirty blues In Flight – FOOTHILLS OF THE BLUES:  I’ve long been a fan of guitarist John L. Holmes – in part because he’s a native of Washington (my adopted home)… my most recent review of his work was of the “Ancient Currents” album he appeared on.  What makes this new album with his group In Flight so appropriate for the troubled times we are all living through, though, is the gutsy down dirty blues style you’ll hear the group play in, as evidenced by their performance on the album opener, “Money and Greed“…

…you’ll want to be sure you SUBSCRIBE to the In Flight topic channel on YouTube, too, if you dig what you’re hearing on this track… I subscribed right away.

The lead guitar work on “Tell the Captain” will help you (as well as the Captain) back on track – unless, of course, your “captain” is crazy as a loon (sound familiar?)… I predict this track will be getting some MAJOR airplay on stations of all types around the planet!

In addition to John’s stellar guitar and synth work, you’ll also hear Ken Wilson- vocals keyboard, sax and flute (Ken Wilson did all of the lyrics and vocals on this album), Glenn Ayers-percussion and Chris Holmes-bass (tracks 2, 3 and 5)… as a side-note, Steve Allen did the photography and graphics, and John L. did the album design; as you listen to the tasty guitar and reeds on “Event Horizon“, you’ll hear just how diverse these players are… every note is “on time”, and the recording is outstanding… one of the most enjoyable tunes I’ve listened to (yet) in 2020.

Since my own playing started with piano boogie, I found the rousing closer, “Basie’s Boogie“, to be most pleasing… just imagine your favorite juke joint back in the ’50’s or ’60’s, and you’ll have it… you’ll be up on your feet & cuttin’ that rug in no time!

It was easy to make my choice for personal favorite of the nine great songs offered up for your aural adventure… “Freedom Train” will give you the sense that (despite our current problems) – good things are comin’ down the line.

#Gutsy #down #dirty #blues #In #Flight

Powerhouse rock performance from down under SkinsNbones – There’s Reason single...