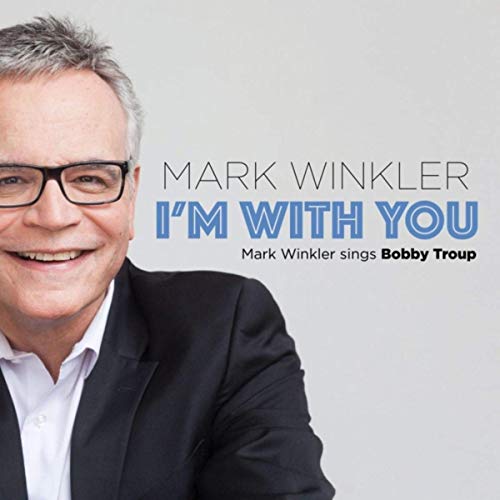 Coolness hipness tribute to Bobby Troup Mark Winkler – I’M WITH YOU:  OK, folks, I “grew up” during the whole “Route 66” thing, when ‘Vettes & GTO’s were the apple of teen eyes everywhere, & we were all listening to Bobby Troup’s ultra-cool song about rollin’ on down th’ road from coast to coast.  I can tell you right now that Mark’s tribute to Bobby’s work is absolutely the coolest and hippest I’ve ever listened to (& believe me, I’ve listened to 100’s of vocalists attempt this feat).

No live video (that I could see) posted yet, but here’s one from an earlier set that will give you a very good idea of how chilly Mark’s performance style is…

…you’ll find MANY other cool performances, so be sure to SUBSCRIBE to Mark’s YouTube channel today… I did.

Mark’s swingin’ jazz vocals are supported on this new release by pianist Rich Eames, bassist Gabe Davis, drummer Dave Tull, and guitarist Grant Geissman, and they’re all in fine form… just scope out the title track, “I’m With You“, to get a taste of how stunningly they support his silky smooth vocals… they “put the cool in cool”!

The album opens with my absolute favorite performance (ever) of the aforementioned “Route 66“… Grant’s guitar during the opening moments leave miles of open space for Mark to draw you into the travel trance he’s weaving for you… totally hip.

It wasn’t hard (at all) to make my choice for personal favorite… “Hungry Man” uses swingin’ rhyme to give you a culinary tour like you’ve never before experienced… the reeds on this song make it a natural for MAJOR airplay on jazz stations ’round the globe – for a LONG time to come!

I give Mark and his stellar crew of players a MOST HIGHLY RECOMMENDED rating, with an “EQ” (energy quotient) score of 4.99 for this most memorable album… GET IT, folks!  More information on Mark’s website.          Rotcod Zzaj