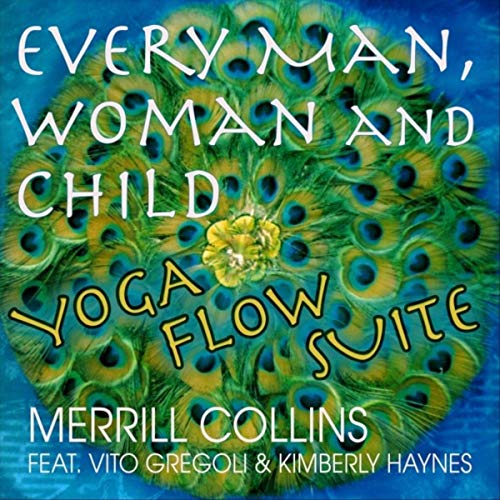 Beautifully realized piano yoga suites Merrill Collins – EVERY MAN, WOMAN AND CHILD YOGA FLOW SUITE:  I’ve reviewed many of Merrill’s wonderful musical adventures, most recently her “Sincero” album… although I didn’t see any live videos from this new release, you will still want to SUBSCRIBE to her YouTube channel, where you’ll find a variety of styles to enjoy.  Her TOPIC channel on YouTube also has many of her albums, including all three from this one.

On the first suite, Merrill leads into the first Sanskrit chant, “Om Mani Pedme Hum“, with her beautiful piano… as always, she has the “pacing” down to an art, encouraging the listener to join into the beauty of her realization… right at the 3:20 mark, vocalist Kimberly Haynes joins Merrill ever-so-gently, and they take you to the outer edges of joyful existence… now, I’m not a believer in formalized “religion” (of any sort), but I can tell you that this is one of the most spiritual experiences you will ever have… the song clearly speaks wonderfully for the “Universal Declaration of Human Rights” (UDHR) that it was created for.  As it says in the liner notes, “we want to engage communities around the globe to move, groove, and meditate to the meaning of this song, and jam with us to create greater awareness of the UDHR“.

Our friend David Vito Gregoli joins on Sitar, with Merrill’s keyboards for the second phase, titled “Ambient Journey“… what’s most impressive, whether you’re a novice or seasoned listener, is the “unhurried” feel of both players… David does an intro that runs right up through the 4:37 mark… then is joined, quite magically, by Merrill’s piano, in one of the most stunning (and powerful) sonic collaborations I’ve witnessed (yet) in 2019.  You can hear the spirits of the universe speaking through these players, no doubt… if any song merits an award – it is THIS ONE!

The final suite, “We The People“, really strikes your heart with the real message the artists (Merrill, David, Kimberly, Maksim Velichkin and Laura Halladay) are conveying… “We the people here by birth , we the keepers of the Earth“… this is my personal favorite of the three suites.

I give Merrill and her players a MOST HIGHLY RECOMMENDED rating, with a (perfect) “EQ” (energy quotient) score of 5.00.  What that also means is that this gets my “PICK” for “most influential ambient album”.  Get more information on the project and the artists on the Spiraling Music page for the release.         Rotcod Zzaj

All natural stunning solo piano Evan Wish – Alone In A...

Calming peaceful solo piano Pam Asberry – All Through The Night