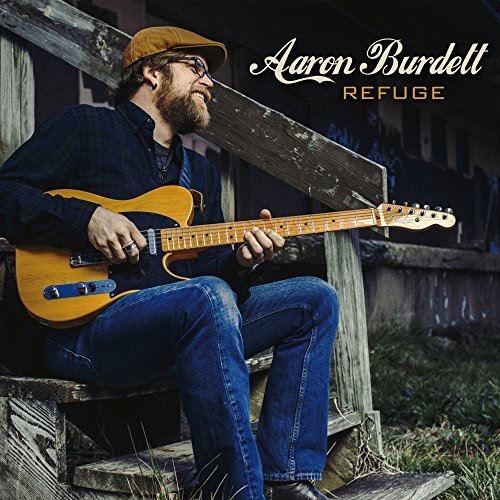 * country indie comfortable * Aaron Burdett – REFUGE: Though this is my first exposure to Aaron’s splendid “down-home” style music, he’s been on the scene for a good long time – this is his seventh album!  As you listen to his excellent guitar and the sweet string sounds that wander in, out & through the track on the opener, “Pennies On The Tracks“, as well as his strong vocal & lyrical presence, it will be clear that he’s a high-energy, high-talent performer who will stay right up at the top of your playlists… a very comfortable song that quickly reminds me of other favorite performers of mine, most notably James Taylor and Leon Russell, as well as classic performers like  Hank Williams and Doc Watson!

His calendar is jam-packed with dates/gigs throughout his home state of North Carolina, & shows that his talent is in demand all around the area (South Carolina), as well as in other places across the country (Wyoming, Colorado, Alabama), and it won’t be any wonder that he’s booked so solidly as you listen to the almost church-service-like sound on “Poor Man“… Aaron’s vocals and strong lyrics will penetrate right down to the deepest parts of your soul, and give you hope for the new days coming in your life.  I believe my friend Bret Harold Hart, who lives down Aaron’s way (Eden, North Carolina) will fall in love with Aaron’s soulful songwriting and independent performance style just as quickly as I did (in fact, I’d love to hear them collaborate together sometime)!

If you look at his discography, you’ll see that Aaron is a real veteran, having released six albums prior to “Refuge“… one of the songs that convinced me he’s a total winner and a true Americana indie is the closer, the 5:03 “Wolves At The Door“… Aaron’s vocals & guitars are joined by Jackson Dulaney on Lap Steel, Jeff Hinkle on bass and drums by James Kylen, and they’ll rope you right into their spell, I’ve no doubt… you’ll be playing this one over & over again.

It was easy to pick my personal favorite of the ten songs offered up for your listening pleasure… the powerful “Another Nail In The Coffin” stirs emotions in my heart that I thought had been long lost… there’s no doubt in my mind that you’ll soon be hearing this song on radio stations across the land, and that it will hit the top of the charts & stay pegged right there for a good long time.   I give Aaron and his excellent cast of players a MOST HIGHLY RECOMMENDED, with an “EQ” (energy quotient) rating of 4.99.  Get more information about this fascinating talent on Aaron’s website.         Rotcod Zzaj