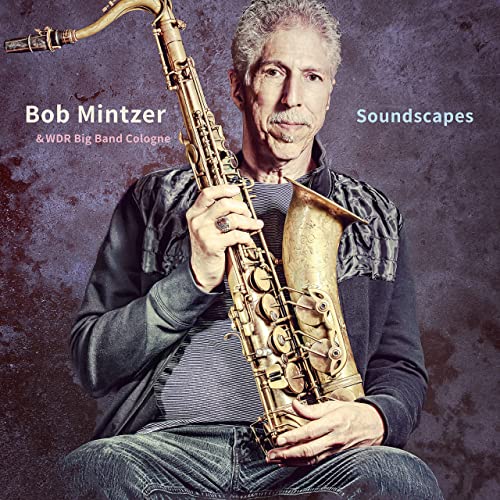 Warm beautiful sonic magic Bob Mintzer and WDR Big Band Cologne – SOUNDSCAPES:  It’s been a while since I reviewed tenor saxophonist and EWI (Electronic Wind Instrument) Bob’s amazing “Meeting of Minds” CD… he’s the composer for the tunes on the new album with WDR Big Band Cologne, and you won’t find more warm and beautiful sonic magic anywhere… here are a few words from Bob about the new release…

To enjoy MANY more exciting performances from WDR Big Band (which Bob has conducted for the last six years, by the way), be sure to SUBSCRIBE to the WDR Big Band YouTube channel… I signed up immediately.

If you’re a big band jazz fan like I am, you won’t be able to resist the high energy playing on the 6:13 “Stay Up“… intricate horn arrangements and flawless recording all contribute to a tune that jazz DJ’s ’round the globe will be playing frequently!

Bob said of the album… “Getting to do a project of original music with the WDR Big Band was a wonderful gift. Having worked with the band for several years, I was well aware of their capabilities, and wrote for them in a way that I think felt comfortable yet challenging“… the “challenging” part was clearly evident on the wonderful “Canyon Winds“… you’ll see the cowboys riding across the ridges as you listen to this fantastic song.

I had no difficulty (whatsoever) in making my choice for personal favorite of the ten tantalizing tunes… “New Look” is the longest performance on the album (9:29), so it gives each of the big band sections a chance to express themselves with crystal-clear clarity… this song is what made me decide to add it to my iPhone player (something that only happens for the BEST JAZZ)!