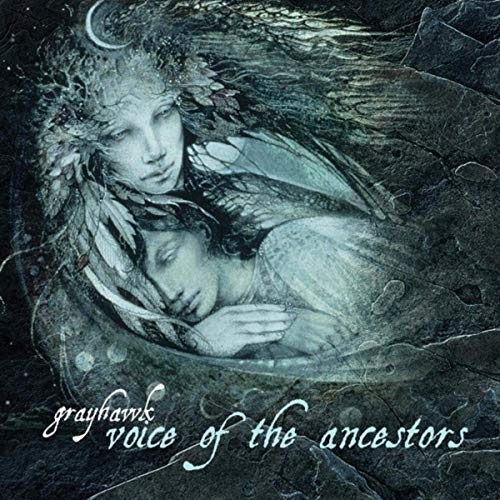 Visionary seductive sonic luxury Grayhawk – Voice of the Ancestors: A gentle journey through ambitious large territories, mostly from ascendant perspectives. This global journey is mostly instrumental but there are some wonderful blendings of languages and cultures in this sonic quest for peace and understanding as well as acceptance of the fullness of the cycle of life we are all experiencing together in our own individual ways. Feel the celestial breezes and hear the blended instruments as they awaken our senses, bringing a newly strengthened feeling of peace and acceptance. The entire album speaks of calm and reflection, with softly trembling flutes, tiny bells, weeping strings, and sparkling harps supported by a mostly transparent and comforting warm bath of cosmic synthesizers. You are at home here, breathing out and floating through the mists of sound and spirit.

This is the third part of Grayhawk’s Shamanic Trilogy (Shamanic Journey, Blissful Magic – Spiral of the Celtic Mysteries)

Transcendent Soul (3:12) The sun is rising. The loss of an infant is probably the hardest thing that a parent can endure, and from this terrible crucible comes a calm acceptance and joyful greeting or signal to this precious spirit as it makes its way from this land to the next, to dwell with the ancestors. If you did not know of this origin of the song, the music would simply bring a sense of gentle calm and great peace. Flutes and harp with a little bit of everything in a nice light and sparce broth.

The Banteay Srei Temple (4:57) A precious jewel of Khmer art, located in Angkor Wat, Cambodia displaying carved sandstone tableaus of maidens and humans with animal heads, a 10th century temple devoted to Shiva, the Hindu creator, maintainer and destroyer. Harps and flutes guide us through the meditation with tiny bells and featuring the dan bau, a traditional one-stringed Vietnamese instrument that cries and comforts.

Guardians of Goddess Vhien Hau (6:07) Southern Vietnam’s Holy Mother of the Realm Ba Chua Xu is a tutelary of health, business and a protector of the border, and the image of the Lady of the Realm according to custom is said to have grown naturally from stone on Sam Mountain near the boundary between Vietnam and Cambodia. This mystical meditation features the dan bau with a bit of harp and the rapid pulsing notes that are prominent in the local folk music found in this part of the world.

Voice of the Ancestors (8:40) Holy synthesizers and patient steadily paced percussion lead the way into this meditation with vocalisms and sparkling shimmering little bells. There is a flute choir all the way from South Africa, blended with Native American flute contributions creating a breathtaking cross cultural synergy of shamanic energy. This was originally titled “Magnificent Angkor Wat” and has some subtle ambient guitar flavorings that stay hidden in the exquisite sonic cuisine.

Peace Prayer A’capella (1:49) Peace to you. End the warfare, let go of the hatred and revenge. This is a prayer for all people throughout the world and is always current.

Peace Prayer (10:11) Percussion leads this extended meditative dance, we all know the words now from the acapella version. The entire orchestra emerges, magnificent and grand, with chimes, horns, synthesizers and strings with the choir featuring solo voices leading the ceremony. The languages heard include English, Hawaiian, Gaelic, Hebrew, Farsi and Arabic.

Ambient Meditation (8:07) Tiny bells with dan tran open our study of peace and reflected wisdom, this leads to sparkling wisps of chimes and flutes from around the planet. All is bliss, all is serene, all is shining.

Peace Prayer (short version) (5:06) The message remains the same for all people throughout the world. Peace to you. End the warfare, let go of the hatred and revenge.

This New Age recording serves to transform the pain of loss and to open new awareness to world peace and transcendence, while including a few deep meditative visits to some holy spots in Cambodia and Vietnam.  HIGHLY RECOMMENDED EQ 3.8 Robin B. James

On Saturday, Feb 9th 2019, The Grayhawk Consort will present an innovative Dance Interpretation of “Peace Prayer” during The Soiree at The Roxy (GRAMMY Weekend 2019) on Sunset Boulevard’s famed Sunset Strip. Tickets