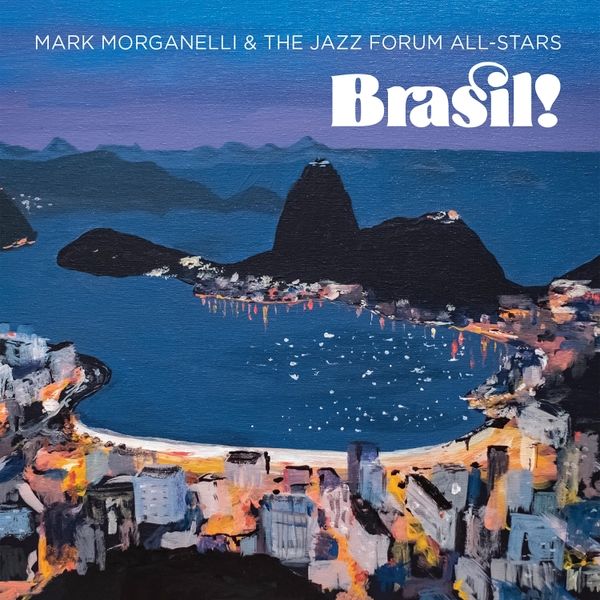 Tasty masterful Latin jazz Mark Morganelli and The Jazz Forum Allstars – BRASIL!:  Mark proves himself to be an absolute “brass master” on this double-CD album… as always, the best way to get to know the players is to WATCH them, so please check out their promo video for the album…

…as you heard, Mark kind of “channels” players like Stan Getz, who has had a huge influence on his own playing… be sure to SUBSCRIBE to Mark’s YouTube topic channel, since you’re there already.

Mark and his group (Mark Morganelli-Flugelhorn, Percussion, Abelita Mateus-Piano, Eddie Monteiro-Midi-accordion, vocals, Monika Oliveira-Vocals, Nilson Matta-Bass, Adriano Santos- Drums, Nanny Assis, Guitar, Percussion, Vocals, Carlos Barbosa-Lima-Guitar) perform Jobim’s “Desafinado” in a most unique fashion, and will have drawn you totally in by the end of the first measure… truly one of the best performances of this classic I’ve ever listened to… I predict that this will be getting airplay in a BIG way on jazz stations ’round the globe!

If it’s dancing you’re longing for, you’ll be up on your feet & gliding around the room over & over again on “So Danco Samba“… you can (literally) HEAR the joy the players are feeling as they play this song.

The percussion intro on the first cut on the second CD, “A Felicidade“, when combined with the Rhodes & vocals, just shimmers with life… I loved Mark’s horn work on this one, and have no doubt you will, too!

In order for you to get the full effect of this high-energy double-CD set, though, I strongly recommend that you watch the band performing the closer for the album, “Aquarela do Brasil“…

This is (without question) my personal favorite of the twenty-seven pieces of Latin jazz splendor Mark offers up for your sonic satisfaction.

I give Mark & his All-Stars a MOST HIGHLY RECOMMENDED rating, with an “EQ” (energy quotient) score of 4.99 for this most memorable and magical musical excursion.  Get more information on Mark’s page for the album.         Rotcod Zzaj

Skillful versatile jazz guitar David Boswell – The Story Behind the...