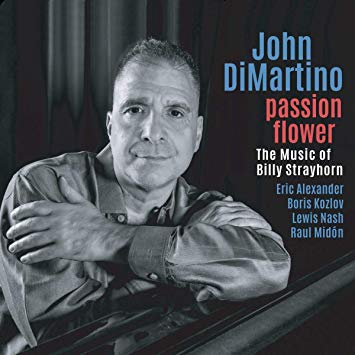 Stimulating swingin’ jazz John di Martino – PASSION FLOWER:  John’s jazz piano is far/above so many of the other players on the scene today… stimulating & swingin’ jazz that will transport you to absolute jazz heaven… John’s piano mastery is joined by Eric Alexander on tenor saxophone, Boris Kozlov doing bass, Lewis Nash on drums, and Raul Midon on vibrant vocals, and they KILL it on tunes like the opener, “Johnny Come Lately” (samples available later; this doesn’t release until April, 2020)… great bass intro from Boris, leading right into some superb sax from Eric – and John’s keyboards are super solid.

Though I didn’t see a channel dedicated to him, I think you’ll enjoy this LIVE video from an earlier performance in 2016…

John’s performance of Billy Strayhorn’s “Take The A Train” is among the most unique I’ve ever heard… just PACKED full of life & the kind of swinging energy that will get you up on your feet & MOVING!

Raul’s vocal on “Lush Life” is clear, hip & totally tasty… this one will, I predict, be getting some MASSIVE amounts of airplay on jazz stations all ’round the globe.

The recording on the album is flawless, as evidenced by the rich tones and ethereal atmosphere John and his players create for you on the title track, “Passion Flower”… you will find yourself coming back to this tune over & over again.

Of the fourteen songs offered up for your jazz joy, it was the 6:33 “Daydream” that got my vote for personal favorite… the interaction between John’s keyboard and Eric’s sax is among the most mellow performances I’ve heard (yet) in 2020!

I give John and his musical mates a MOST HIGHLY RECOMMENDED rating, with an “EQ” (energy quotient) score of 4.98 for this highly memorable jazz jaunt.  Get more information on John’s website.            Rotcod Zzaj

Totally hip jazz Turning Circles – What Goes Around Comes Around