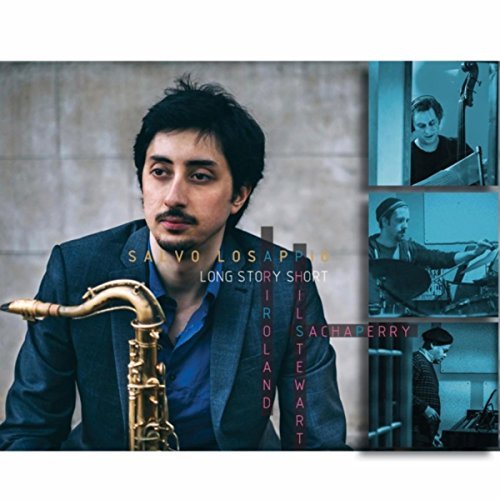 Salvo Losappio thrilling passionate saxophone jazz Salvo Losappio – LONG STORY SHORT:  Salvo’s thrilling and passionate saxophone work is a new act for my ears, and as you listen to the high-energy opener, Salvo’s rendition of Charlie Parker’s “Shaw ‘Nuff” (when the samples are ready – this doesn’t release officially until May, 2018), you’ll understand why I say that… he’s joined by Sacha Perry on piano, Ari Roland on bass and Phil Stewart doing drums, and they fit/play together exceedingly well.

Salvo started learning sax at the tender age of 9, and moved to NYC in 2015 from his native Italy… he’s played with lots of “name” musicians around the Big Apple, and when you scope out his original composition, “Boerum Hill“, you’ll understand why he’s one of those “special players” who is going to make it big… keep your ears on this young dude, he’ll be amazing and exciting your soul for many years to come; his reed work is both penetrating and pleasurable on this great song!

It’s actually one of the shorter tracks that won my vote for personal favorite of the seven offered up… another original composition by Salvo, “Leo for Two” only clocks in at 4:33, but I felt it demonstrated just how solid these four folks are together… solid, SOLID jazz all the way around.

I give Salvo and his bandmates a MOST HIGHLY RECOMMENDED, with an “EQ” (energy quotient) rating of 4.98.  A very solid (though short – it clocks in at 37:47) debut album!

Soulful jazz vocal adventures Cathy Segal-Garcia – Straight Ahead To The...