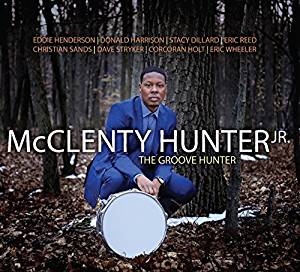 McClenty Hunter hip groove filled jazz McClenty Hunter – THE GROOVE HUNTER:  Fantastic drummer McClenty really doesn’t have to do much “hunting” when it comes to finding the groove… as you listen to his most mellow original, “My Love”, you’ll know (beyond the shadow of a doubt) that you’re hooked into one of the coolest jazz cats on the scene today… just a beautiful piece of music (the samples aren’t up yet, since this is a May 2018 release; I’ll come back & add them in as soon as I’m told they’ve gone hot)… the sax solo on this one is killer, & in fact, each of the players have their own place on this 6:20 marvel… Eddie Henderson – trumpet, Donald Harrison – alto sax, Stacy Dillard – tenor sax, Eric Reed – piano, Christian Sands – piano, fender rhodes, Dave Stryker – guitar, Corcoran Holt – bass, Eric Wheeler -bass.

If it’s upbeat & swingin’ you’re thirsting for, you’re going to be spinning the opener, Herbie Nichols’ “Blue Chopsticks” over & over again… I just loved Eric’s piano on this one; high-energy performance from each of the players on this thoroughly stimulating cooker!

If you want to learn more about this fascinating player, join him on his FB page, where you’ll also get updates on the album drop as it comes near… you’ll also want to be sure you subscribe to his YouTube channel – I did.

When I did my first run-through of the album (I’m on my third listen now), I knew what my personal favorite pick was going to be immediately… McClenty’s performance of Wayne Shorter’s “The Big Push” is the most penetrating version of the tune I’ve heard – ever!

I give McClenty and all his players a MOST HIGHLY RECOMMENDED, as well as a (perfect) “EQ” (energy quotient) rating of 5.00 – meaning that his album also gets a “PICK” for “best drummer-led jazz album”.      Rotcod Zzaj