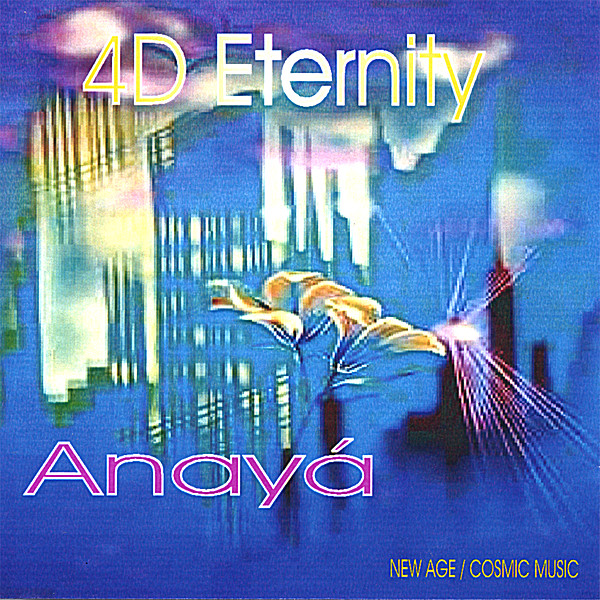 Masterful enchanting electronic atmospheres AnayaMusic – 4D ETERNITY: As you might imagine, I spend hour upon hour listening to all types & genres of music… I won’t bore you with numbers (though there are a ton of numbers involved), but I can easily say that I listen to (at least) 1000 albums per year… Anaya has been a part of that listening experience nearly since I started this magazine… her latest release is an electronic masterpiece that you won’t find anywhere else… for a “live” glimpse of what she can do, read my review/critique of her “Luminous” single/video.  Also, here’s a wonderful video (just released) of the new album…

Anaya says that the new release is meant to “embrace the new vibrations that we live now”, and even that is an understatement… she has created a musical palace of enchanting electronic atmospheres that will reach down deep into your soul and bring you absolute (and enduring) joy… even the shortest piece, “Skies” (12:33), transports the listener most pleasantly through vistas heretofore unrealized… in addition to her amazing keyboard and guitar wizardry, you’ll also hear Bosco on guitar and Olga doing castanets… I particularly enjoyed the “slow build” of atmospherics on this piece – sort of like the sky as you watch it drifting ever onward, I’d say.  This composition alone makes the purchase of the album worthwhile… I anticipate this song will be nominated for (and WIN) awards in the New Age/World categories.

“Eternity” portrays timelessness in absolutely glorious fashion, with magical strings supporting a journey to the infinite… Anaya’s pacing (and mixing) will keep you on the very edge of your seat as you try to anticipate the next movement… a simple, yet wonderful, tune that will (easily) wrap you in it’s spell.

I’m seldom surprised by most forms of music, even electronica, but when the percussion weaves in after the beautiful string introduction to “4 D“, my ears were just amazed… this is (not only) my favorite electronic song of the three (long) performances offered up, it is also my personal choice for best (yet) in 2019… this composition could (and should) be most strongly considered for TV and movie!

I give Anaya a (well-deserved) MOST HIGHLY RECOMMENDED, with a (perfect) “EQ” (energy quotient) rating of 5.00… that means, of course, that it also gets my “PICK” for “best electronic atmospheres album”… Get more information about this fascinating and timeless artist on Anaya’s website.    Rotcod Zzaj