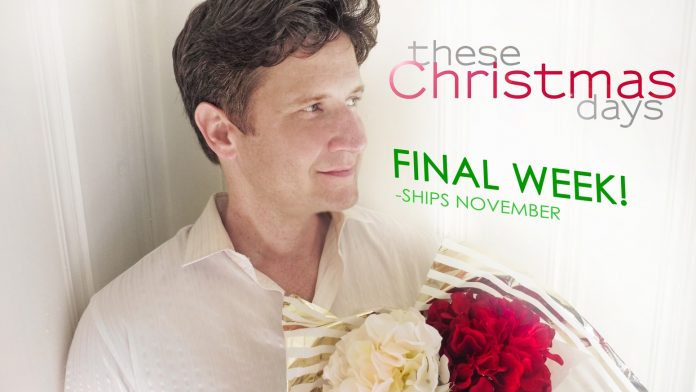 Jason Paul Curtis all original seasonal jazz vocals Jason Paul Curtis – THESE CHRISTMAS DAYS:  One of the reasons I’ve shied away from writing reviews for “seasonal” albums is that they are (so) often just “the same old songs”… nothing could be further from that than the high-spirited, high-talent original vocals that Jason gives us on this FINE album… it doesn’t go live until November, 2017, so you won’t find any samples yet, but I immediately fell in love with the joy he projects on tunes like the absolutely swingin’ “Christmas Breakfast”… in point of fact, it’s the most original Christmas song I’ve heard since I was about eighteen years old… LOVED it!

The album is just a little “short” for my tastes – it clocks in at just over 34 minutes… BUT (& this is a BIG one)… you’ll find Jason’s lyrical & vocal skill so exuberant and personable that you’ll be spinning each and every one of the songs at least several times a day… the best way to get acquainted with this fine artist is to watch the KICKSTARTER video he created for the release.  There’s also a nice little promo video embedded below to give you a bit more of an idea on how superbly he has crafted this recording…

I’ll be coming back to add in the links for all the song titles I’ve inserted here, especially for my personal favorite, the big-band jazzy “I Want Snow”, which also features his daughter Isabella… they literally shine together on this great song.  A wonderful (& jazzy) celebration of Christmas that everyone will want to hear.  I give Jason and his crew a MOST HIGHLY RECOMMENDED, with an “EQ” (energy quotient) rating of 4.98 for this fine album.  Watch Jason’s website to get updates on the final release.         Rotcod Zzaj