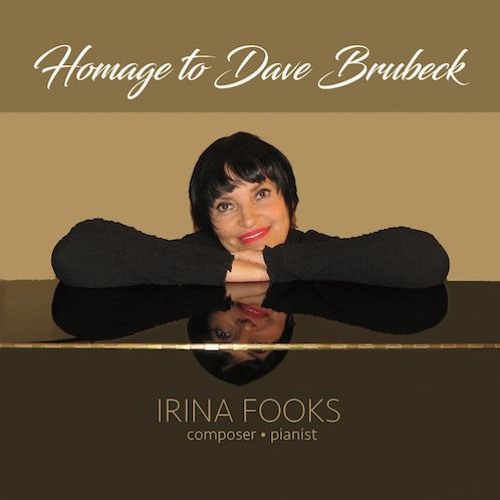 Irina Fooks emotional engaging solo piano Irina Fooks – “HOMAGE TO DAVE BRUBECK”:  A new solo piano artist with a strident and engaging style, Irina graduated from the Conservatory of Music as a pianist in Russia, then moved to the U.S. in 1989… though her new album pays homage to the great jazz pianist Dave Brubeck, Irina has a style completely her own, with strong leanings towards classical jazz ballads.  What sets her work apart from all the other solo piano artists is her crisp and strident style of playing… I was especially impressed with her original titled “Exprompt”…

…though it only clocks in at just over two minutes, it displays her sensitivity on the keyboards, and will serve as a shining example for other keyboard artists.

On “You and Me” (composed by Zinovy Shersher), you will feel like you are in a gigantic auditorium, with Irina’s graceful playing surrounding and comforting you in every way imagineable.

A great video of Irina’s “Dialogue” was recently submitted for Grammy consideration, which you can watch below…

As you saw and heard, Irina has a very straightforward playing style and creates music that is full of emotion, painting strong and sentimental visuals for listeners around the globe.  There’s no doubt in my mind that this performance merits strong consideration for awards… it evoked many memories of life and the living for me personally, and that’s what makes Irina’s work so worthy – she can reach out and touch the listener through her magical keyboards!

Right now, the only place I could find this album is on Soundcloud, but it will be released officially by Ariel Records in October, 2017…  a full website is being created for Irina soon (we will come back and add the website link in as soon as we are notified that it is “live”)… for the moment, you can keep track of her music and activities on her Facebook page; (that’s only a minor criticism,) though, because songs like my personal favorite on the album, “Holocaust Waltz“, reveal high talent and ability that many other pianists can only aspire to.  It’s also quite surprising that though she has such a strong classical background, she is so comfortable with jazz ballads influenced by Dave Brubeck, and has produced such a strong tribute to him with this fine album.

I give Irina a MOST HIGHLY RECOMMENDED, especially for folks who love original solo piano works, with an “EQ” (energy quotient) rating of 4.98.        Rotcod Zzaj