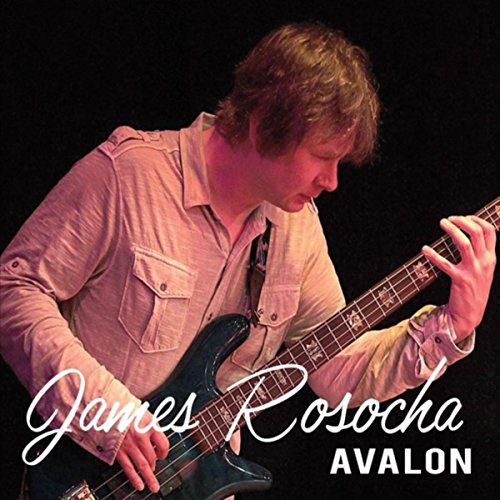 James Rosocha heavy original funky jazz James Rosocha – AVALON:  James is a longtime veteran in the jazz & funk community (he’s played with great players like Randy Brecker and Hiram Bullock, as well as many others), but this is his debut solo release, and I can tell you – your ears (& your soul) are in for a total treat! Just scope out the 5:08 opening track, “Dysfunction Junction“, and you’ll be an instant believer!  He’s got an absolutely stellar cast of players playing with him on the nine all-original compositions he presents… in addition to leading on bass, James does keyboards and vocals; he’s also got Steve Kramer on piano; Audric Jankauskas on guitar and synth solo; Josh Orlando, Kevin Soffera and Scott Jordan on drums; John Christie on percussion; Dave Haywood on guitar and vocals; BD Lenz on guest guitar; Kendall Scott on vibes and second keyboard; Nick Rolfe and Thomas Alexander on guest keyboards; and Geoff Mattoon on tenor and soprano saxes.

The peppy, but mellow, sound James generates through his bass on “By the Wayside“, may be a jazz waltz, but it’s chock-full of vivid images of life and the living of it – to the hilt… the tune also features great solos from James and Geoff, as well as a fantastic keyboard solo by Steve… this tune (in fact, all nine of them) plays VERY often on my iPhone!

James is no stranger in the jazz world, having played for over twenty years and on nine albums with fusion guitarist BD Lenz, but this is his first foray in the lead role, and he absolutely NAILS it… & that’s best demonstrated on my personal favorite of the nine songs offered up… “Harlem River Drive” is totally driven by James bass, and is THE best bass-led tune I’ve heard (yet) in 2017 – the sax solo that rolls in at the 3:46 mark is full-soul-ahead & will definitely rock your world!  I would most strongly advise that you listen to this, at least for the first sitting, with your headphones on… James and his excellent crew get a MOST HIGHLY RECOMMENDED, with an “EQ” (energy quotient) rating of 4.99 for this superb debut.  Keep your ears on this cat, you’ll be hearing much more from him in the coming months and years!  You can learn more about James on his FB page.