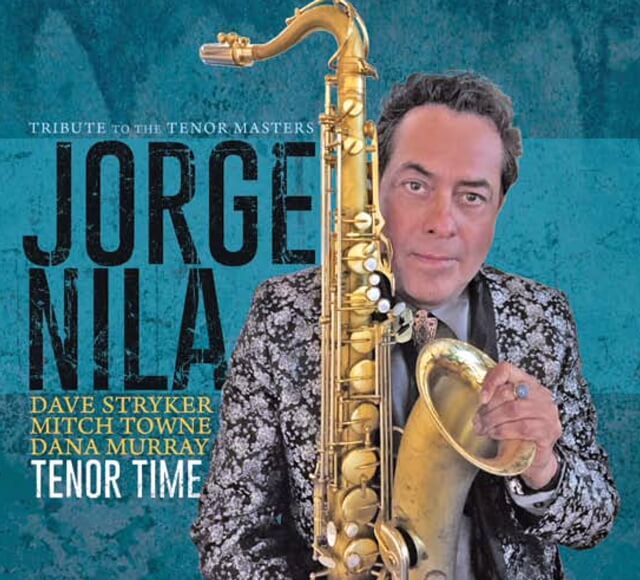 Highly entertaining jazz tribute to tenor sax masters Jorge Nila – TENOR TIME:  You won’t find samples up for this album, because it isn’t being released until January 4th, 2018, so you’ll have to rely on my ears (for right now; I’ll add the samples in when they go live), but I can tell you that as you scope out Jorge’s highly entertaining rendition of Hank Mobley’s “Soul Station”, you’re going to be mightily impressed… he’s got that FUNKY sound down pat, & you’ll be groovin’ right-on along, just like we were “back in the day” when Hank was still on the scene.

The fact that Jorge has his old pal guitarist Dave Stryker producing (and playing on) the album doesn’t hurt the “attraction factor” one little bit, and when you throw in mighty fine organ from Mitch Towne and drums by Dana Murray, it’ll be an “immediate hit”, I’ve no doubt… when you check out the group’s performance on “Rocket Man”, you’ll realize that jazz doesn’t get any better… this is one of the best renditions of Stevie Wonder’s tune I’ve ever heard, in fact!

There was no doubt in my mind what my pick for personal favorite would be, though… Joe Henderson’s “Inner Urge” (6:37) has just the kind of “hip” all us jazz cats were craving way back in 1964 when Joe first created & released it… the recording is flawless, and (since I’m an “organ guy”) I couldn’t help but fall in love with Mitch’s solid organ performance… Jorge’s reeds cinch the tune as a winner… I wouldn’t be (at all) surprised to see this get nominated for (and WIN) an award!

I give Jorge & his excellent players a MOST HIGHLY RECOMMENDED, with an “EQ” (energy quotient) rating of 4.99 for this fine album.  Get more information on Jorge’s FB page.        Rotcod Zzaj