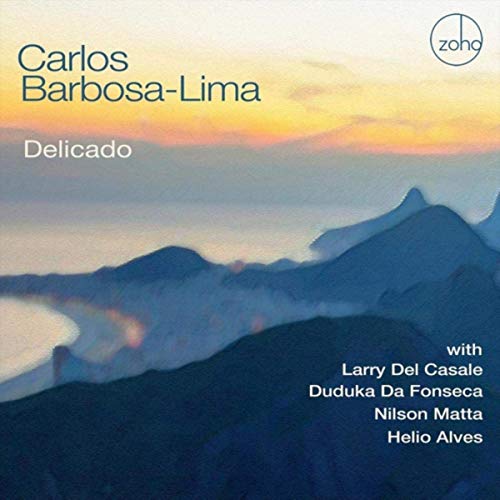 Exciting jazz tribute to Rio de Janeiro Carlos Barbosa-Lima – DELICADO:  CARLOS plays magical guitar, and chose excellent players to join him… Larry Del Dasale on guitar, Duduka Da Fonseca plays percussion, Nilson Matta on bass and Helio Alves does piano on this thoroughly exciting jazz tribute to Rio De Janeiro… just listen to songs like “Sambolero” to get a feel for where they are going to take you on this splendid 15-song opus.

Though the video below is from several years ago, it shows Carlos as the master he is on jazz guitar…

…totally tasty, wouldn’t you agree?  In fact, I’d like to see a YouTube CHANNEL dedicated to Carlos’s music (hint! hint!).

The harmonic perfection you’ll hear on the title track, “Delicado“, makes it well worth purchasing the album… it only clocks in at 3:30, so you’ll be using the “replay” button often, I suspect.

The mighty mellow intro to Jobim’s “A Felicidade” segues perfectly into a tasty performance that I predict will achieve MAJOR rotations on jazz stations of all stripes ’round the globe.  It features Larry Del Casale, Duduka Da Fonseca, Nilson Matta & Helio Alves… simply wonderful music!

It took me three very pleasureful listens through the entire album to choose my personal favorite of the fifteen songs offered up… “Samba do Avião” is another Jobim tune that captures the essence of Brazil in this group’s solid performance!

I give Carlos and his players a MOST HIGHLY RECOMMENDED rating, with an “EQ” (energy quotient) score of 4.97 for this fine album.  Get more information on the Zoho Records page for the release.             Rotcod Zzaj