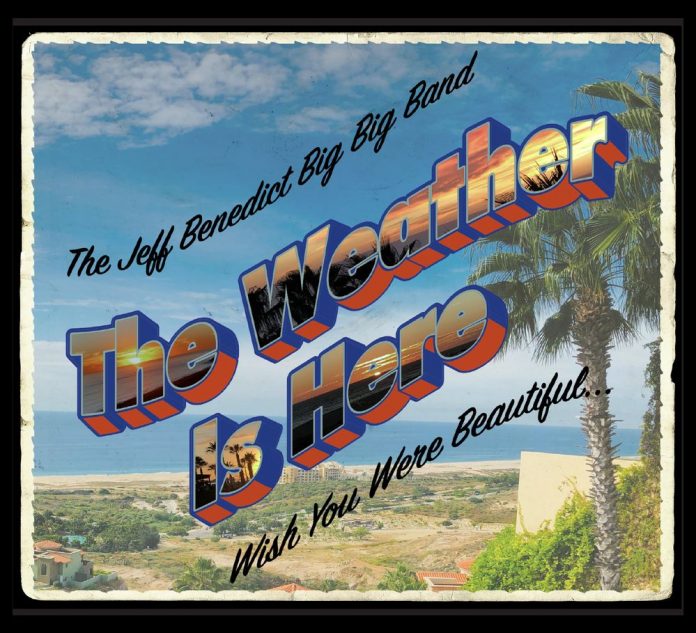 Daringly diverse big band jazz The Jeff Benedict Big Band – THE WEATHER IS HERE WISH YOU WERE BEAUTIFUL:   When I first reviewed saxophonist Jeff’s “Holmes” CD, I was impressed enough to give them a “PICK”, and on his daringly diverse big band jazz release, it gets even better!  Though I didn’t find any LIVE videos (hint! hint!) on The Jeff Benedict Big Band topic page, you can enjoy the entire album there…

One of the things that makes Jeff’s work so different from others is that while it “sounds like” big band, it “feels” like solid groove; especially on superb pieces like “Ant Dance“, which features some superb solo work by Jeff and guitarist Dave Askren… you’ll be playing this one over & over (& OVER) again, and I predict that jazz DJ’s worldwide will have this running on their playlists frequently!

The funk n’ fury you’ll hear on Jeff’s arrangement of Miles Davis’s “Nardis” will prove (beyond all doubt) the total talent of the players in Jeff’s superb band – a full-bodied sound that’s seldom accomplished on jazz big band albums; the player list is too long to itemize here, but you can check it out on Jeff’s band page.

By my second listen (all the way) through the ten-song album, I had no doubt what my choice for personal favorite would be… Jeff’s original, “Moonscape“, opens the album full of soulful expression and blues tones that will delight your ears!

I give Jeff and all his players a MOST HIGHLY RECOMMENDED rating, with an “EQ” (energy quotient) score of 4.99.  Get more information on Jeff’s store page.    Rotcod Zzaj