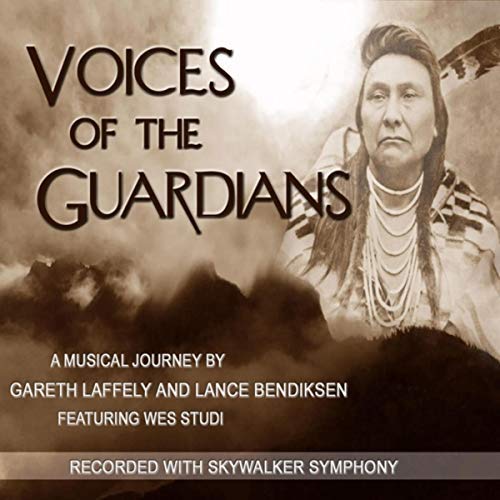 Amazing ancient wisdom Gareth Laffely Lance Bendiksen – VOICES OF THE GUARDIANS:  During the late 1990’s, I was fortunate to be involved in a project for Washington state that placed computers and Internet in most of the tribal libraries across the state, and as a result, I received several CD’s for review from Native American performers… many of those were wonderful, and are still treasured in my library…

I can tell you (without a doubt), though, that Gareth’s sensitive Native American flute work, as well as great piano from Lance, and deeply moving spoken word from Native American actor Wes Studi make this an album you will never forget once you’ve experienced it… to get a “raw” taste for their in-studio performance together, check out the very well-produced video trailer they put together for the album first…

There is a most unique element added on this superb set of performances, too… the SkyWalker Symphony weaves full-bodied strings (and other instruments as well) in/against Gareth’s enchanting flute work, Lance’s keyboards and Wes’s superb tale-telling… just listen to that on the 3:28 “Spirit Quest” to hear how well those dynamics sound together… I can (easily) see this high-energy tune being considered for (and WINNING) an award… were I on the voting panels, it would definitely make it!

The percussion intro on the 4:26 “Elders” sets up the piece very nicely for Gareth’s flute; indeed, all the players are woven together seamlessly to make for one of the most intriguing listens I’ve had (yet) in 2018… I just LOVED this song, and have no doubt you will as well.

The tune that really captured my ears, though, is also the longest one on the album (5:33)… “Reaching for the Border” will allow you to hear strangely comforting echoes from the past, and will hold you totally spellbound as you listen to it over and over again.  This is my personal favorite of the dozen files offered up for your enlightenment and sonic enjoyment.

I give Gareth and his players a MOST HIGHLY RECOMMENDED, with a (perfect) “EQ” (energy quotient) rating of 5.00 – which means that he also gets my “PICK” for “most innovative Native American music release”.  Get more information on Gareth’s Voices of the Guardians website.         Rotcod Zzaj