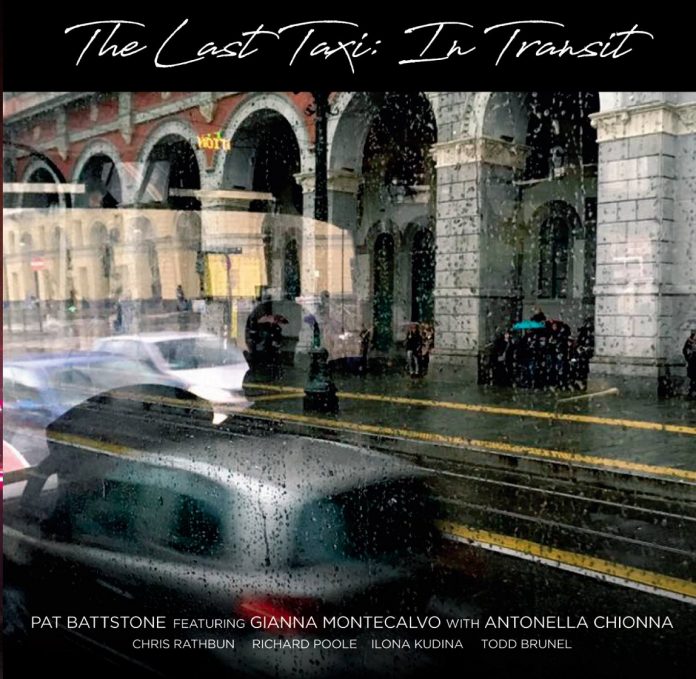 Oddly comforting vocal ensemble wizardry Pat Battstone featuring Gianna Montecalvo – THE LAST TAXI:  IN TRANSIT: My pal Pat Battstone has been producing music for many years now… I’ve only been associated with him for the last six or seven years, but I can tell you right now that this CD is the absolute best work I’ve ever heard him do… his friend Gianna Montecalvo (a renowned vocalist/teacher in her native Italy) joined him and several of the players from Pat’s original Last Taxi CD (reviewed here) on the CD as well (view the player list here)… listeners who are “stuck” in “MOR” (middle of the road) mode more than likely won’t appreciate or understand what’s going on here, but those who anticipate and enjoy sonic mystery will be enthralled with pieces like “Lonely Avenue“; Gianna has such natural vocal talent, and she just wraps her vocal around the instruments on this amazing improvisation!

To really get closer to their wizardry, I (MOST) strongly recommend that you watch the following video capture of their performance together in October, 2017…

…I especially loved the interaction between the vocalists and Ilona’s magical flute on this splendid realization!  Be sure and visit Pat’s YouTube channel (under the name “Dr. Benway”), where you’ll find a most enchanting set of recordings/videos… be sure to SUBSCRIBE, as I did, too.

Though I don’t normally critique the art on CD’s, it’s important to note that Christine Atturio’s graphic layout, and the camera work of Daniela Chionna create a perfect compliment to the stellar music on the CD…

Pat’s piano intro on the 3:21 “Harbor Lights” brings back memories of the year (or so) I spent in Virginia Beach, Virginia, but rapidly morphs into some of the most powerful & accessible free-style work you’ll ever hear.

If you listen to nothing else on the album, be sure you check out the 6:02 “Appocalisse ora” (Apocalypse Now)… if this isn’t “the end of our taxi ride“, it’s certainly the harbinger of our entry into the “black hole” we are all destined for… the vocal interactions are full-bodied, and each of the instruments has a turn at bringing about the destruction of “normal” (a VERY good thing, whether you know it or not)!

Having done (more than) a few improvised vocal performances myself, I know that the extended songs are often the most precious, and that is unequivocally proven on the opener for this 53:41 album… “As the City Awakens” uses Gianna’s marvelous ability to bring “life to life” in absolutely stunning fashion… this performance is, in fact, my personal favorite of the eleven offered up… quite simply, AMAZING.

I give Pat, Gianna and the rest of their crew a MOST HIGHLY RECOMMENDED, with an “EQ” (energy quotient) rating of a (perfect) 5.00… this means, of course, that it gets a “PICK” from me for “best vocally enhanced improvised recording”.  You can get more information on Pat’s webpage for the release.             Rotcod Zzaj