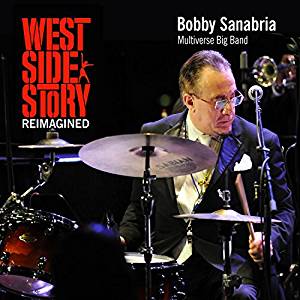 Wondrous audio visualizations Bobby Sanabria Multiverse Big Band – WEST SIDE STORY REIMAGINED:  I was in my early teens when “West Side Story” first hit the big screens, folks, and we were thrilled by it, all of us rushing out to get the (double) LP for the musical captures of the great songs.  Drummer Bobby Sanabria and his 21-piece big band take those wondrous songs to an entirely new level on this July, 2018 release (samples aren’t up yet, but will be linked in when I’m told they’re up)… their sophisticated Latin jazz treatment of songs like the 6:03 “Jet Song” will have you soaring for sure!

You can watch an intimate explanation from Jamie Bernstein (yes, Leonard’s daughter) in the trailer for the album…

…when Jamie says that Bobby & his players are “forward moving”, she’s definitely on the money… the infusion of Latin rhythms that Mr. Sanabria uses is a big part of what makes this album so stunning.

A total of twenty songs on the double album will just “WOW” your ears, especially as you listen to the band’s blues/mambo performance of “Gym Scene”, and their rendition of “Cool” is the ultimate in chill… I was up & dancin’ ’round my review room in only moments as I listened to these two great songs.

Of the twenty songs, my personal favorite is “The Rumble/Rumba”… the horns whizz in, around & through some of the best percussion you’ve ever listened to on this tune.

I give Bobby and his great players a MOST HIGHLY RECOMMENDED, with an “EQ” (energy quotient) rating of 4.98 for this splendid musical vision.  Get more information on the JazzHeads page for Bobby Sanabria.        Rotcod Zzaj 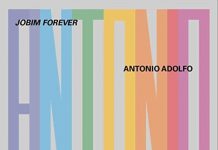