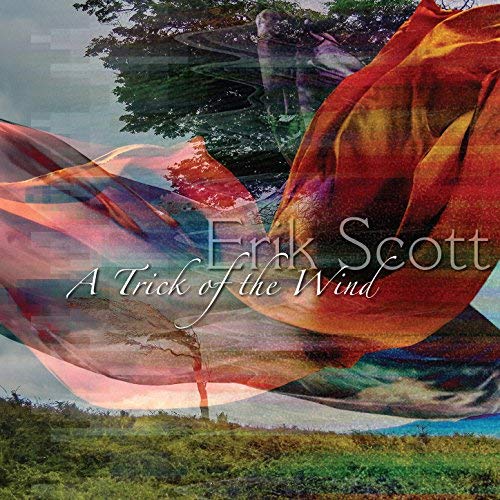 Visionary aural wizardry Erik Scott – A TRICK OF THE WIND:  It’s been a fair amount of time since I last reviewed Erik’s magical bass artistry in issue # 148… his new album (due out in August, 2018; I’ll come back and add the samples in when I’m told it’s gone HOT) is nothing short of genius… to make that really hit home for you, I most strongly recommend that you watch the one video currently available from the album…

…as you heard/saw, this piece alone makes the album worth purchasing; those vocals he has woven into the texture of the song are subtle, but absolutely haunting and hypnotic… the rhythm-shift at the 2:00 minute mark will have you soaring along with the angels!

All the original music was created by Erik, and he’s included a whole host of high-talent players – John Pirruccello, Celso Alberti (drum loops, acoustic drums & percussion), John Luttrell (electric guitar), Andy Mitran (percussion), Jeff Pearce (guitar synth), and Jeff Oster (trumpet, flugelhorn) all join together in work that will surely be nominated for awards… that’s especially true for compositions like “Ghosts of Storyville“, which features superb wordless vocals by Sandy Griffith, and an absolutely tasty interchange between Erik’s bass and Jeff’s trumpet (I’ve listened to a lot of work by Jeff, and this is one of the best performances I’ve ever heard him do).

It’s difficult to describe the “mood” that “The Invisible Wand” creates for me… each of the instruments speaks strongly to the heart, and the organ sounds mesh perfectly with the wonderful vocal that Sandy realizes on this most engaging song.  I’ve no doubt that this song will be nominated for (and WIN) awards!

There’s an almost “church” feel to “A Wing and a Prayer“, in great part because of the wonderful organ and piano sounds from Erik; this tune will make you feel the sacred beauty of life, and help you soar above the trials and tribulations of the daily grind… if any song in 2018 should be given an award – it is this one!

Of the nine songs Erik offers up for your sonic enjoyment, it is (without question) the meditative and “whispery” “A Wing and a Prayer” that gets my vote for personal favorite… the blending of sitar, vocals and other various instruments give it an ambience few performances can achieve.

I give Erik and his musical compadres a MOST HIGHLY RECOMMENDED, with an “EQ” (energy quotient) rating of a (perfect) 5.00… that means that the album also gets my “PICK” for “best atmospheric album”.  Get more information on Erik’s Facebook page.            Rotcod Zzaj