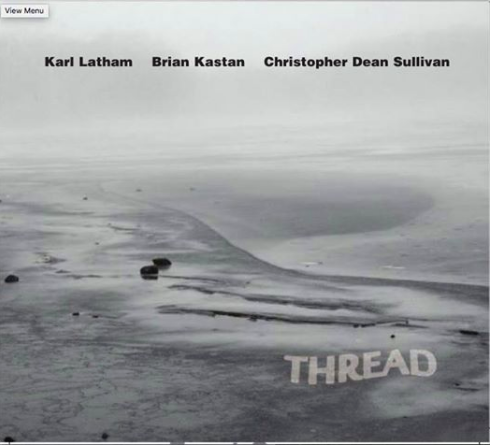 Thread stellar otherworldly improvised trios Thread – KARL LATHAM, BRIAN KASTAN, CHRISTOPER DEAN SULLIVAN:  When I say “otherworldly”, that’s literal… my friend Brian told me (in private conversation) that Thread must’ve “summoned the dead to be alive“, & I certainly believe that… ghosts of FZ (Frank Zappa), Sonny Sharrock & all those cats come to mind (no KIDDING), but the trio’s music also has shades of some of my other guitar heroes, too, which I’ll delve into a bit later in this narrative… right now, I want you to watch the only (current) video available (it’s Brian with drummer Karl Latham, which is light one member – Christopher Dean Sullivan on bass)… a full 30-minute improvised set that will get your head ready for the double album Thread is soon to release (when Brian tells me the samples are ready, I’ll come back & add them in)…

…now, if you’re a “middle-of-the-roader“, you probably won’t understand that video… but, for those of us who “get” improv, it’s kinda’ like mutant musical DNA… a bit “fractured“, but totally exciting because of it’s freshness, the immediacy of the moment and the new directions it will take your mind in!

Regular readers here will know that I’ve already been “hex-posed” to Brian’s stellar works, and written extensively about them, most recently in my review of his “Not So Standard” album… allusions were made to “wormholes” in that review, but I can tell you right now that as you listen to the sheer rumbling beauty on “Searching”, you’ll realize that Thread have “been to the very top of the black hole”, and are beckoning you towards the realities of tomorrow… Christopher’s bass solo work and Karl’s drums are certainly the most exciting I’ve heard (yet) in 20:18 on this amazing 7:58 tune…

“Samadhi” is defined as “a state of intense concentration achieved through meditation“, and within the first thirty seconds of this deeply moving 29:40 excursion, you’ll realize that if you weren’t at the final stages yet – you are now!  Brian’s fantastic guitar on this one reminds me of another of my improvised guitar heroes… my friend Davey Williams (who I’ve played my own improvised sets with many moons ago) would surely approve of the trio’s intergalactic jaunts on this scorching tune!

It was difficult this time to choose a personal favorite, because each of the eleven (long) improvisations is full of the strands of randomness that make life worth the living… in the end-run, though, it’s the 27:01 “Seeking” that gets my vote… recording on this track is pure perfection, and there’s not one second of “slippage”… seamless playing from the opening note to the very last bar.

Once again, Thread has put together a set of music that not only merits my MOST HIGHLY RECOMMENDED, but clearly deserves an “EQ” (energy quotient) rating of a (perfect) 5.00… ergo, Thread gets my first 2018 “PICK” for “best otherworldly album”.  I can’t give you specific pages to link to for the album, but keep your eyes on Brian’s website to stay up to date on this superbly improvised musical adventure.     Rotcod Zzaj