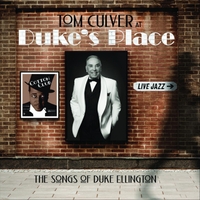 Stirring jazz vocal tribute Tom Culver – DUKE’S PLACE:  It’s been a while since I last reviewed Tom’s stirring jazz vocal work in issue # 110… this new release just KICKS IT, folks… some marvelous players support his classy vocal work… pianists like JOSH NELSON and RICH EAMES, with ultra-cool players such as guitarist LARRY KOONSE and drummer KEVIN WINARD all contribute to Tom’s award-winning performances on this 2019 release!  While I couldn’t find any LIVE tracks from the new release, you will enjoy this live performance from several years back…

…in the meantime, be sure you SUBSCRIBE to Tom’s YouTube channel to see several of his other songs – it WOULD be nice to see a “live” performance from the new album there at some point, too.

The bluesy atmosphere Tom & his players create on “Mood Indigo” struck me as especially representative of his skills at “making the mood happen”… I can (easily) see this tune winding up in MAJOR rotations on jazz stations around the globe, folks!

If you’re really in the mood for a song that’s upbeat & reflects Tom’s highly creative energy, you’re gonna’ fall in love with the swingin’ opener & title track, “Duke’s Place“… hip style, the whole group just ROCKS IT out on this one.

You’ll hear an even dozen upbeat performances that are certainly worthy of consideration for awards, including my personal favorite, the hard-charging closer, “Caravan“… Tom’s rendition of this classic is among the best I’ve ever heard (& that’s saying something, ‘coz I’ve heard it thousands of times)!

I give Tom & his players a MOST HIGHLY RECOMMENDED rating , with an “EQ” (energy quotient) score of 4.99.  Get more information on Tom’s website.       Rotcod Zzaj