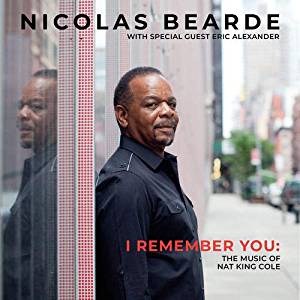 Silky smooth jazz vocals Nicolas Bearde – I REMEMBER YOU:  It’s been a good while since Nicolas got a “PICK” from me in issue #133, and he’s back with the full power of his silky smooth jazz vocals for you to dig down deep into, as he pays tribute to one of his earliest influences, Nat King Cole… you can get a closer look at the new release by watching the ultra-hip trailer they made for it…

…ain’t that some kinda’ sweet, folks?  You can watch MANY more cool performances when you SUBSCRIBE to Nicolas’s YouTube channel – as I did.

If you’re an old-school vocal jazz fan, you’re going to immediately fall in love with “That Sunday, That Summer“… this one spins over & over again (already) on my player… I predict it will get HUGE amounts of airplay on jazz stations & channels ’round the globe!

The upbeat atmosphere Nicolas & his players create for you on “Thou Swell” will lift your spirits and loosen up your tippy-toes, folks… you’ll be swingin’ all around that room as you listen to this one.

The cast of players is notable in itself… pianist Josh Nelson, bassists Alex Boneham and Dan Feiszli, drummers Dan Schnelle, Lorca Hart and Jason Lewis, and pianist Peter Horvath, and some stunning performances from saxophonist Eric Alexander… of the ten songs they offer up for your jazz journey, I found the mellow & laid-back “Sweet Lorraine” to be my personal favorite… again, this will be getting some MAJOR spins on jazz stations, folks!

I give Nicolas and his folks a MOST HIGHLY RECOMMENDED rating, with an “EQ” (energy quotient) rating of 4.99 for this superb tribute to “the King”.  Get more information on Nicolas’s website.             Rotcod Zzaj